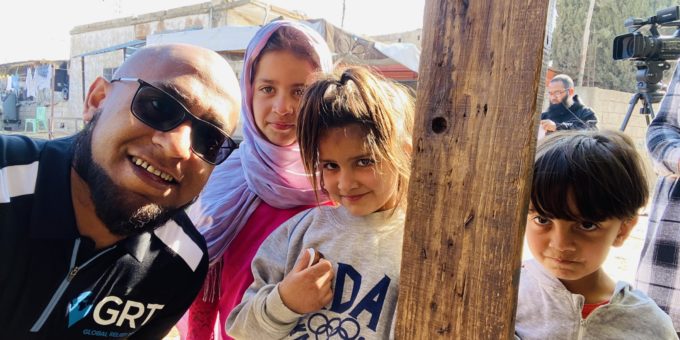 Oldham’s ‘Running Man’ returned from a humanitarian mission to the Lebanon-Syria border after raising and donating £10,000 by running eight half-marathons in eight cities.

Afruz Miah, 48, ran a gruelling 13 miles in each of the eight cities including in Manchester, Cardiff and London where more than 200 people joined him in total on his campaign.

He raised funds for GRT (Global Relief Trust), a charity that works in eight countries. They deployed to three refugee camps on the border where they distributed winter aid such as blankets, fuel, winter clothes, family food packs and medication.

A team of eight volunteers joined Afruz on the mission and it was an ‘eye-opening experience’ for them. They handed out thousands of winter packs and 500 hot food packs.

Afruz said: “We met an old Palestinian lady aged about 82 who was forced to move to the Lebanon-Syria border when she was six. We went to her house where there were old ornaments on the wall. After seeing our interest in them, her daughter-in law gifted an old ornament to us and wouldn’t accept our money. This shows the generosity and kindness of the refugees.

“They have so little but they have such big hearts. There were no beggars in any of the camps we visited–even children- as they are proud people regardless of their circumstances. They just wanted to be around us without expecting anything.

“Going forward we are hoping to set up educational facilities in the camps. We take education for granted here in the UK as we have it free but people there are having to move mountains for the privilege.

“We are planning to set up livelihood projects such as a bakery that will employ 10 widows so they can provide for their families with the aim of coming out of poverty and helping others.”

Afruz also added that running so much for charity is not an easy matter as he has had to make many sacrifices because he is not a natural runner. He has had to change his diet, control what he eats and has to be very disciplined. He is nearly 49 so it is not easy and his feats of endurance are all the more impressive.

He added: “The diet I follow and the food I eat is specially prepared by my wife; I have also been supported by my family. I’ve been regularly travelling to different countries, towns and cities away from my family which has been very difficult.

“I worked in the education sector for 20 years in a 9-5 job and would have a meal at home at least once a day, however that routine has gone out of the window, the structure of my days and weeks have gone. My campaigns are a joint effort with my supporters and well-wishers otherwise they would have been impossible tasks to complete.”

Mahmuda Khatun, marketing manager at GRT said: “Global Relief Trust has long been committed to refugees from Syria and Palestine by providing numerous comprehensive packages of essential aid. This year our team has been delivering much needed aid including winter blankets, insulation sheets, fuel and food-packs. Our teams are working in war-torn Gaza, Yemen and Syria.”

Afruz travelled to the Rohingya refugee camps in Bangladesh on December 9 to deliver winter aid.

To donate to the cause visit http://givebrite.com/runningman

Quebec to roll out rapid tests in pharmacies, urges people to work from home as omicron looms