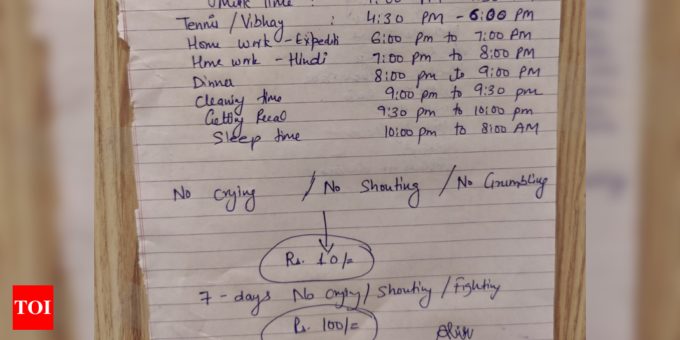 Would you give up shouting, fighting, grumbling for a week? If there’s a price for it, how much would you charge to do all your chores in discipline?

This 6 year old Indian boy has agreed to do all the chores as per a schedule without crying, shouting, fighting and grumbling for a week for Rs 100.

But if he continues doing this for a week, he earns Rs 30 extra.

Going with the name Batla_G, a Twitter handle has shared this amazing agreement, scripted by him in his handwriting, drafted on the piece of a paper most probably taken out of a copy.

Speaking to ETimes, he said, “I am not incentivising my son to not cry or be angry. The schedule is like a broad time table that we both designed together as a fun activity and motivation of receiving an incentive at the end of the day added to teach him about personal finance and savings.”

“He’s really excited about getting a Rs 10 note that he puts in his piggy bank at the end of the day and looks forward to it the whole day and he doesn’t have to follow the time table exactly but even if he tries to be mindful of the broad schedule, he gets his bonus. He is looking forward to savings and buying a new toy at the end of the month,” he said.

The agreement entails an alarm time and a wake up time along with a milk time and TV time. “10 min wake time is for “Papa, just 10 more minutes please” negotiation in the morning,” explains the father in another tweet.

The entire day has been divided giving priorities to play time, tennis and school work.

As per the agreement there is a cleaning time from 9 pm to 9.30 pm.

The agreement holds that the sleeping should be approximately 10 hours which is from 10 pm to 8 am.

“Bonus is not linked to no crying or shouting but for overall performance for the day,” the father explained in a tweet a day later in response to clarifications sought by netizens on the bonus.

The tweet which has been retweeted for over 3000 times and liked by over 31,000 twitter accounts by now has attracted parents mostly and many have come forward to share their parenting experiences.

No plans for a lockdown: Prof. Channa Jayasumana

Johnston admits there are queues, says Ministers should have been positive about economy
2022-03-06