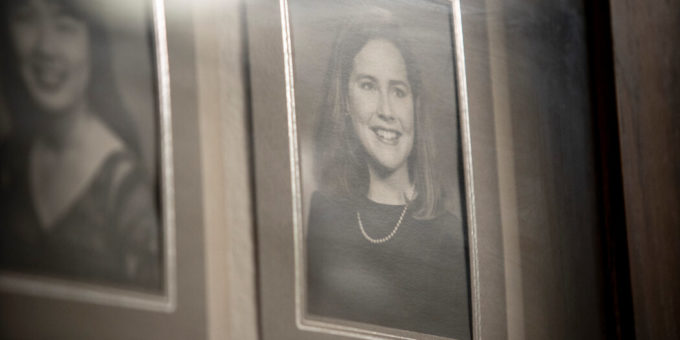 Judge Barrett is from the South and Midwest. Her career has been largely spent teaching while raising seven children, including two adopted from Haiti and one with Down syndrome, and living according to her faith. She has made no secret of her beliefs on divisive social issues such as abortion. A deeply religious woman, her roots are in a populist movement of charismatic Catholicism.

From her formative years in Louisiana to her current life in Indiana, Judge Barrett has been shaped by an especially insular religious community, the People of Praise, which has about 1,650 adult members, including her parents, and draws on the ecstatic traditions of charismatic Christianity, like speaking in tongues.

The group has a strict view of human sexuality that embraces once-traditional gender roles, such as recognizing the husband as the head of the family. The Barretts, however, describe their marriage as a partnership.

Some former members of the group say it could be overly intrusive. Other members, like Judge Barrett, appear to have treasured their connection to it. But she does not appear to have spoken publicly about the group, and she did not list her membership in the People of Praise when she filled out a form for the Senate Judiciary Committee that asked for organizations she belonged to.

Around the time of her appeals court confirmation, several issues of the group’s magazine, “Vine & Branches,” that mentioned her or her family were removed from the People of Praise website.

Family members have also declined to comment on her participation.

To Judge Barrett’s critics, she represents the antithesis of the progressive values embodied in Justice Ginsburg, her life spent in a cocoon of like-minded thinking that in many areas runs counter to the views of a majority of Americans.

Canadian cartoon mystery finally solved after 6 years, thanks to the internet
2022-09-11

Karan Kundrra on his career choices, trolls he faces for dating Tejasswi Prakash: ‘Do these people have the capacity to reach us?’
2022-06-17