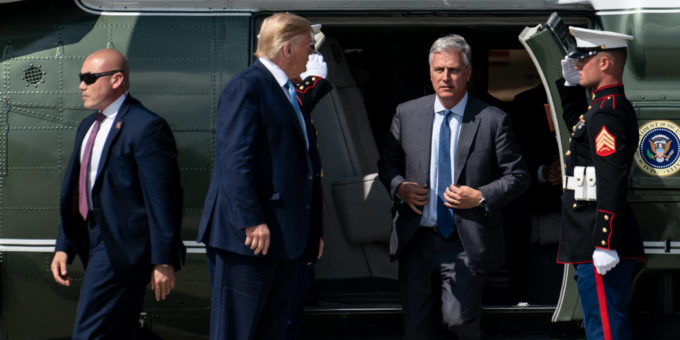 WASHINGTON — Even his many critics conceded that the former national security adviser John R. Bolton brought useful credentials to the job: decades of foreign policy experience and a keen grasp of how the gears of government turn.

Mr. Bolton’s main problem, as it turned out, was that he knew too much. Confident in his experience to a fault, he was unwilling to shade his deeply held hawkish views, which he defended with a prickly personality that alienated colleagues — and ultimately President Trump himself, leading to his ouster last week.

Robert C. O’Brien, Mr. Trump’s choice to succeed Mr. Bolton, flips that equation. He is a former Los Angeles lawyer with limited government experience before he became the State Department’s point man for hostage negotiations. But his friends all cite an affable, ingratiating personality that has earned him allies throughout the Trump administration, notably including Secretary of State Mike Pompeo and Mr. Trump’s son-in-law and adviser, Jared Kushner, both of whom supported his appointment.

His physical appearance did not hurt, either. Whereas Mr. Trump was known to grouse about Mr. Bolton’s famous bushy mustache, the president has been taken with Mr. O’Brien’s well-tailored looks and easy demeanor, and thinks he “looks the part,” as one person close to the president said.

Mr. O’Brien has a record of traditional conservative foreign policy views, and has supported a tougher American approach toward China, Iran and Russia. And Mr. O’Brien served with Mr. Bolton when he was President George W. Bush’s ambassador to the United Nations. But Mr. O’Brien is no ideological firebrand in the mold of Mr. Bolton, who pushed Mr. Trump to take military action against Iran and wore contempt for the federal bureaucracy on his sleeve.

Friends and Trump officials say that while Mr. Bolton saw himself as a crusader for specific policy goals — and some said a necessary counterweight to Mr. Trump’s instincts — Mr. O’Brien, 53, is more likely to act as an arbiter of competing views and a facilitator of Mr. Trump’s decisions. One Trump official said that Mr. O’Brien would bring “no outside agenda” to the job.

That approach fits the traditional definition of the national security adviser job, a potential source of comfort to a foreign policy establishment at home and abroad long rattled by Mr. Trump’s impulsive style, and more recently by Mr. Bolton’s disregard for deliberative, organized policymaking.

But questions remain about whether Mr. O’Brien’s background has adequately prepared him for the myriad challenges of his new job. Mr. Trump is currently navigating, among other things, a broiling crisis with Iran, a deadlocked trade war with China, a stalemate in nuclear talks with North Korea and the recent collapse of peace talks in Afghanistan.

Mr. Fontaine, who considers Mr. O’Brien a friend, said that “in stark contrast to Bolton,” the president’s new aide will have to spend time “learning the nooks and crannies of government.”

“When you’re in the Situation Room, you can be surprised by how many people are actually there,” he added.

Mr. O’Brien, a founding partner of the Los Angeles-based law firm Larson O’Brien, is not a complete newcomer to the Situation Room. As the United States government’s top hostage negotiator, he has interacted with military, intelligence and diplomatic officials in his efforts to free Americans held prisoner across the globe.

Among those freed during Mr. O’Brien’s tenure are Andrew Brunson, a pastor held by Turkey for two years, and Danny Lavone Burch, an oil-company engineer kidnapped in Yemen and rescued in a raid by forces from the United Arab Emirates.

Mr. Trump has often celebrated these releases with on-camera meetings in the Oval Office, where Mr. O’Brien praised the president lavishly.

“This wouldn’t happen with all of these hostages and detainees without the support of the president,” Mr. O’Brien said in March after Mr. Burch’s release. “The president has had unparalleled success in bringing Americans home without paying concessions, without prisoner exchanges, but through force of will and the good will that he’s generated around the world.”

More recently, Mr. Trump sent Mr. O’Brien to Sweden for the unusual mission of trying to win the release of the rap star ASAP Rocky, who had been arrested on charges of criminal assault. A Swedish judge released the rapper pending a resolution of the case and a court later found him guilty; he was ordered to pay damages but did not have to spend more time behind bars.

Mr. O’Brien waged a low-key campaign for his new job, making his desire clear to the president and encouraging others to talk up his credentials. He encountered little opposition in contrast to candidates like Brian H. Hook, the special envoy for Iran, whose personal loyalty to the president is doubted by some administration officials.

He is a longtime friend of Mr. Pompeo’s and was on the secretary of state’s short list of acceptable choices, according to two people involved in the process. His warm relationship with Mr. Pompeo will, for now, reverse the dysfunctional rivalry that existed between Mr. Bolton and Mr. Trump’s senior diplomat.

Mr. O’Brien will be Mr. Trump’s fourth national security adviser in three years, the most any president has had in a first term. Following two predecessors who came to grate on the president and were fired — Mr. Bolton and the man who preceded him, Lt. Gen. H.R. McMaster — his survival will depend in part on keeping the president happy.

Speaking to reporters in Los Angeles on Wednesday with Mr. O’Brien by his side, Mr. Trump suggested they were off to a good start.

“I think we have a very good chemistry together, and I think we’re going to have a great relationship,” Mr. Trump said. “He is a very talented man.”

At a later stop near the southwestern border in California, Mr. Trump was openly critical of Mr. Bolton. “John was not able to work with anybody,” he said. And he bristled when asked about a report in Politico that said Mr. Bolton, at a private lunch earlier in the day, had criticized his foreign policy instincts. “Guys like Bolton and others wanted to go into Iraq, and that didn’t work out too well,” Mr. Trump said.

While Mr. O’Brien does not have the record of television punditry that helped land Mr. Bolton the job, he has written regularly about foreign policy and collected a series of essays into a book, “While America Slept: Restoring American Leadership to a World in Crisis,” published in 2016 with a cover blurb from Mr. Bolton and a glowing introduction from the conservative commentator Hugh Hewitt.

In his book, Mr. O’Brien cites Winston Churchill as a hero, condemns what he calls President Barack Obama’s weak foreign policy and calls for America to face down emboldened “autocrats, tyrants and terrorists.” That view would seem out of sync with Mr. Trump’s well-documented affinity for autocratic leaders, from Russia to Saudi Arabia to Brazil.

In 2012, Mr. O’Brien was an adviser to Mitt Romney when he ran against Mr. Obama. And he was not an early supporter of Mr. Trump in the 2016 campaign. During the Republican primaries, he first advised Gov. Scott Walker of Wisconsin and then joined the campaign of Senator Ted Cruz of Texas.

In one published opinion piece for Politico in October 2015, Mr. O’Brien counseled Mr. Cruz to criticize Mr. Trump more aggressively on foreign policy and advised “playing up how chummy he will be with Vladimir Putin if he is elected.”

Jerrold D. Green, the president and chief executive of the Pacific Council on International Policy, a foreign affairs organization in Los Angeles, said that he has known Mr. O’Brien for more than a decade and that Mr. O’Brien had been scheduled to be the keynote speaker on Wednesday at Pepperdine Law School’s Constitution Day, but had to cancel because of his appointment as national security adviser.

“He’s well loved in California, which is interesting, for a rather conservative Republican in this which is the heartland of liberal Democratic politics,” Mr. Green said. “He’s a very, very popular, well-respected, well-liked guy here, despite the fact that his political universe is Scott Walker and Mitt Romney and Ted Cruz, who are somewhat less than iconic amongst most Angelenos. It kind of speaks to his personal qualities.”

Afghanistan conflict: The young face of a brutal war

In Pictures: Namaste Trump – thousands welcome US president to India
2020-03-01