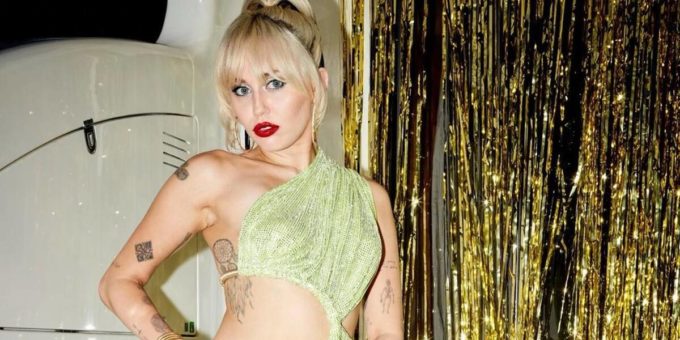 Miley Cyrus and Pete Davidson lit up Miami with their live performance at ‘Miley’s New Year’s Eve Party’ that streamed on NBC and Peacock TV on December 31. 2021.

Along with the star-studded performances were multiple outfit changes in ensembles by some of the biggest global brands (and an unfortunate wardrobe malfunction that the singer handled like a pro).

For the rehearsals before the show, Miley opted for comfort in a cutout black unitard by Victor Glemaud paired with tinted sunglasses and a black hat.

The Wrecking Ball singer brought Cher energy with this fringe black sequin gown with strategic cutouts that she styled with golden heels.

Miley also sported a silver distressed skirt and top set during her raging hit song Party in the U.S.A performance. Unfortunately, later during her performance with 24kGoldn, the top came undone. But Miley gracefully walked off the stage to the beats of the song and came back wearing a red blazer that she wore earlier in the show.

At the end of the show, she said, “Thank you so much, everybody, thank you. Tonight’s show was all about being flexible, rolling with the punches, and making the best out of even the worst circumstances. And that resilience shouldn’t end here. Let’s bring that into the New Year with us.”

Later in the evening, she changed into a black form-fitting dress with black knee-high boots, both with golden chain links. The outfit was from Mugler’s Fall/Winter ’21 collection.

Miley is the queen of risqué. No one pulls it off quite like her. Like this mint green shiny dress with a dangerously high slit and cut-outs by Bronxandbanco from its Spring Summer ’22 collection.

Miley’s feather-cuffed sleeved red dress was from Gucci’s Spring Summer ’22 collection, which featured a sheer panel and a feathery-hem train grazing the floor.

If there’s an outfit that spells ‘party’, it has to be this silvery, fringy, shiny ensemble by Versace from its Fall Winter’ 19 collection.

What’s not to love about this absolutely OTT look? The blue sequined bra and the bewejelled skirt styled with a Dolce & Gabbana feathery, multi-coloured jacket is meant to be in a party.