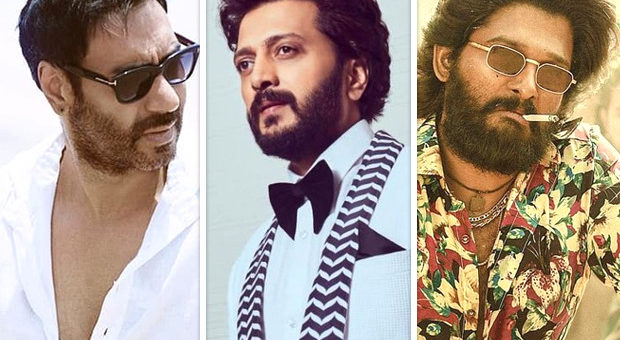 Allu Arjun’s grand action entertainer, Pushpa: The Rise – Part 01, finally released yesterday, on December 17 after a long wait. The film got a huge release not just in Telugu but also in dubbed versions, including Hindi. The promotions were limited but the film carried huge buzz and it translated into healthy footfalls for the Hindi version. The audiences were blown away by the concept, Allu Arjun’s massy avatar, action and execution. Another aspect that surprised them was the opening disclaimers.

Under ‘Special Thanks’, the two film personalities that have been thanked are actors Ajay Devgn and Riteish Deshmukh. If you are wondering why they got a mention and how they are connected to the film, we have found the answer. A source told Bollywood Hungama, “The team of Pushpa: The Rise – Part 01 had reached out to Ajay Devgn and had asked him if he could tweet the link of the trailer of the film’s Hindi version. Ajay was more than happy to do so. In his tweet, he stated that the trailer is ‘powerful’ and wished good luck to Allu Arjun.”

The source continued, “Similarly, Riteish Deshmukh also happily tweeted a teaser video which was made to announce that the film’s theatrical trailer would be out the next day. Riteish also wrote highly of the film and the actor. The makers were touched by their gestures and hence, they included their name under ‘Special Thanks’.

An industry insider said, “In recent times, Allu Arjun has been supportive of the efforts of Bollywood in bringing back viewers in most states. In October, he wished the team of Sooryavanshi, which starred Ajay Devgn in a dynamic role, all the best. 2 days ago, at the press conference in Mumbai, he congratulated Sooryavanshi’s makers as they succeeded in getting viewers back to cinemas. Ajay and everyone else in the film were touched by Allu Arjun’s words and the way he cares for the cinema business. Hence, it’s no surprise that Ajay got instantly ready to share Pushpa: The Rise – Part 01’s trailer.”

Thalippu Dosa: This Easy Tadka Dosa Is The Ultimate Way To Sate Your Cravings
2021-03-24