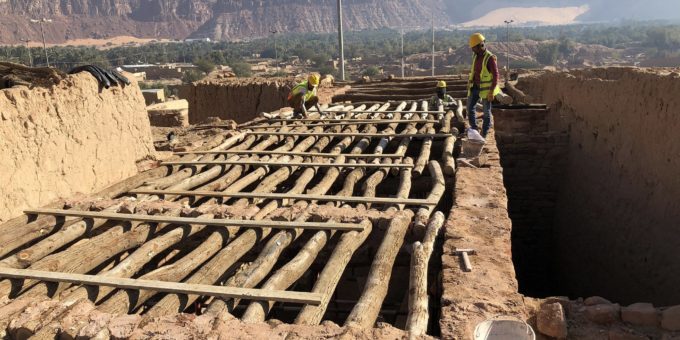 The Hamad Bin Yunus and AlZawiyah mosques in AlUla’s Old Town are located 1,100km from Riyadh in north-west Saudi Arabia. For over 800 years the area has been a stopping point for pilgrims to Makkah and situated near the ancient earlier spice and incense trade routes. The town was only abandoned in the early 1980s.

Dr Abdulrahman AlSuhaibani, Consultant for Archaeology and Heritage at RCU, said: “From pre-historic burial sites to the cutting edge Maraya venue, and from pre-Islamic Kingdoms of Dadan and Lihyan to the Islamic Old Town, we’re excited to celebrate and share the cultural oasis that is AlUla with the world.

“As we explore and make new discoveries across over 22,000km2 of heritage, we’re committed to protecting and preserving AlUla’s incredible human history for the benefit of residents and visitors alike. These two mosques were once vital to their community, and we look forward to them bringing people together once more.”

Interior recovery to the AlZawiyah mosque

RCU has worked closely with both international experts and AlUla’s community to not only restore the mosques and other sites, but also to understand better the traditional building techniques originally used.

In restoring the mosques’ roofs, the restoration team used locally-sourced tamarisk wood joists, which were then layered with palm-leaf branches (jarid) and palm-leaf matting (hassir). The final element of straw and mud bricks on top provides light-weight and historically accurate protection against the elements.

The use of similarly traditional techniques extended to the restoration of the mosques’ walls and floors, from which modern concrete and plaster was carefully removed, allowing the brickwork beneath to be carefully studied. Traditional mud-plaster was then hand applied in age-old fashion by first throwing balls of mud at the walls during shady times of the day to prevent drying, then smoothing down with a wooden flattener.

Abdulrahman AlImam, an AlUla local and conservation consultant for the project, states, “Natural clay, wood and palm leaves were – and now are again – used in the roofs of buildings in the Old Town. The building materials used are characterised by the unique nature and heritage of AlUla.”

Members of the community, some of them children and grandchildren of former residents, such as Abdulrahman AlImam, joined the international experts to lend their own knowledge and deep interest in revitalising the Old Town.

The Hamad Bin Yunus and AlZawiyah mosques are both located in the AlHalaf neighbourhood south of the Mussa Bin Nussair citadel and reflect AlUla’s history as an important stopping point on pilgrimages to Makkah and Medina.  The Hamad Bin Yunus mosque dates from the 8th century AH (14th century CE), while the dates of AlZawiyah mosque’s original construction are still being investigated.

Mohsen AlQarni, Director of the Programme for the Reconstruction of Historical Mosques, said: “The restoration of the Hamad Bin Yunus and AlZawiyah mosques in the Old Town comes within the framework of the Historic Mosques Restoration Programme, which aims to preserve historical mosques all around the Kingdom.”