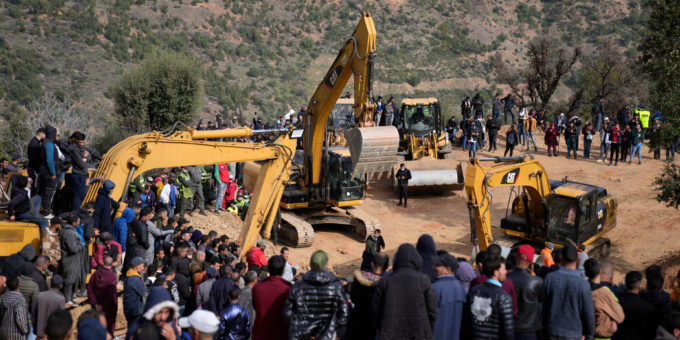 A 5-year-old boy was pulled from the depths of a 100-foot well in northern Morocco on Saturday night, ending an emotional four-day rescue operation that has transfixed Moroccans and many others across North Africa.

The boy, named Rayan, had been stuck in the well near his home in the tiny village of Ighrane, about 60 miles from the blue-walled city of Chefchaouen, since Tuesday afternoon.

His condition was not immediately clear. His parents looked tired but calm as he was brought out on a stretcher and put into a waiting ambulance. He was being moved to a helicopter waiting at the scene to transport him to a hospital in a larger city.

Rescuers had worked day and night to extract the boy, first digging in the well itself and then — when they feared that its walls might collapse in on him — bulldozing a giant furrow from beside the well, then digging a horizontal tunnel across to reach him.

The operation remained delicate and dangerous until the very last moments as the workers tried gingerly to bring him out through the tunnel connecting the new shaft to the well without triggering a collapse.

Video from the scene on Friday evening showed rescuers manually drilling sideways toward Rayan, their work lit by headlamps, as prayers and shouts of encouragement burst from the gathered onlookers.

Some onlookers sat around or had spent the night sleeping under nearby trees, eager to witness the resolution of the crisis. Rayan’s family made couscous, the traditional Moroccan dish, and served it to the crowd. Others distributed bread and dates.

Earlier in the operation, the rescuers were able to send Rayan oxygen and water, according to Maghreb Arabe Presse, a state-run news agency, but he was in delicate condition: In short videos of the boy shared to social media, he appeared to be shivering slightly. Still, the images of him moving provided a glimpse of hope.

Until the rescuers were able to lower a camera down by rope to monitor him, they had not been sure that he was alive.

“Everyone is doing their best so that he comes out alive and that we can take him in our arms by the end of the day,” Rayan’s father told Le360, a local publication, earlier in the week. “But I do not hide from you that his mother and I are dejected and very worried.”

He said he had been in the process of fixing the well, which he owns, when Rayan fell in while he was playing. But initially, he had not realized where the boy had gone and searched for him for hours before the discovery.

Rescuers from the Royal Gendarmerie along with a team of surveyors and municipal workers, were all involved in the rescue effort. Local news reports said that even a local mountaineering and caving society had helped.

The tiny village was overrun with reporters on a scale it had never seen before, many of them broadcasting live scenes of bulldozers digging under the floodlights to an audience of tens of thousands.

The five bulldozers had managed to nearly reach the full depth of 100 feet by midday on Friday, but the rescuers then had to tunnel horizontally toward Rayan, manually digging about 18.5 feet. Rain and hard rock in the diggers’ way complicated the effort.

As Moroccans waited in suspense, the hashtag #SaveRayan became a viral rallying cry on Twitter. On Friday, the hashtag was trending across Morocco and neighboring Algeria, and even in France, where there is a large Moroccan diaspora.

“I was shocked when they told me that he’s in the well, I’m still in shock, but I’m still hoping he’d get out alive,” Rayan’s mother told Hespress, another Moroccan news outlet. “I pray to Allah to get him out alive.”

11 Daily Habits of People Who Seem To Be “Always Slim”

Watch: Spruce Up Your Summer Drink With This Paan Jal Jeera Recipe
2022-04-22