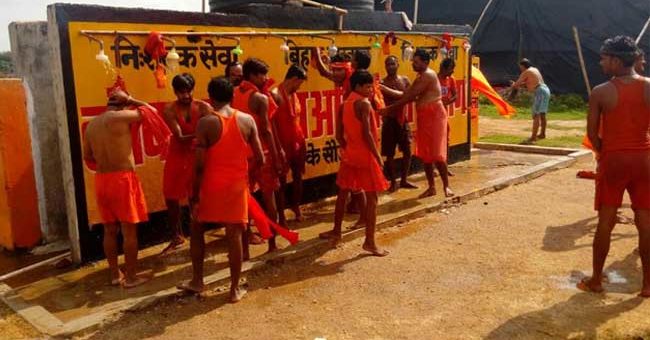 The Kanwar Yatra had been cancelled last year, too, amid the first wave. (File photo)

Health and citizens’ right to life is paramount, the Supreme Court said today as it asked the Uttar Pradesh government to re-consider holding even a ‘symbolic’ Kanwar Yatra in view of the COVID-19 threat. “All other sentiments whether be religious is subservient to this basic fundamental right,” the court said.

“We are, of prima facie view, that it concerns all of us and is at the heart of the fundamental right to life. The health of citizenry of India and right to life is paramount, all other sentiments, whether it be religious (or otherwise), are subservient to this basic fundamental right,” the two-judge bench of Justices RF Nariman and BR Gavai said.

The next hearing is set for Monday.

The court said it would be forced to pass an order if the Yogi Adityanath government failed to reconsider its decision to hold the yatra.

“We can give you one more opportunity to consider holding yatra physically at all. This or else we pass an order. We are all Indians and this suo motu has been taken up as Article 21 applies to all of us. Either you reconsider to have it at all or we deliver,” it said.

The top court’s direction came after the UP government told the bench it would allow a symbolic yatra, and that only devotees who have been fully vaccinated will be given permission.

“The UP Disaster Management Authority discussed this issue and said those who undertake the yatra must be fully vaccinated. Gangajal is being kept at tankers at locations,” the UP government’s lawyer, CS Vaidyanathan, told the court.

To this Justice Nariman, who was heading the bench, said: “We all are citizens of India… Article 21 – right to life – applies to all. UP cannot go ahead with physical yatra. 100 percent”.

“This is an age-old custom and considering religious sentiments, states must develop a system to make holy Gangajal available through tankers. States must ensure distribution of Gangajal amongst devotees should follow social distancing, adhering to all protocols,” the Centre told the court.

Earlier this week, the Supreme Court had issued notice to the Uttar Pradesh government over its decision to allow the Kanwar Yatra.

The court, which took up the matter suo motu, said citizens were “perplexed” by the the yatra being permitted at a time when Prime Minister Narendra Modi and medical experts have warned against large gatherings and urged people to follow social distancing and other Covid protocols.

The yatra had been cancelled last year, too, amid the first wave.

Every year, an estimated 30 million Kanwariyas (devotees of Lord Shiva) from various northern states travel on foot or by other means to collect water from River Ganga at Haridwar to offer at Shiva temples in their areas.

The fortnight-long yatra, which begins with the onset of the month of Shravan, around July 25, and goes on till the first week of August, sees Kanwariyas from Uttar Pradesh, Haryana, Punjab, Delhi, and Himachal Pradesh gathering in Haridwar.

Grassy Narrows to get $68.9M more from Ottawa for centre to care for people with mercury poisoning
2021-07-27