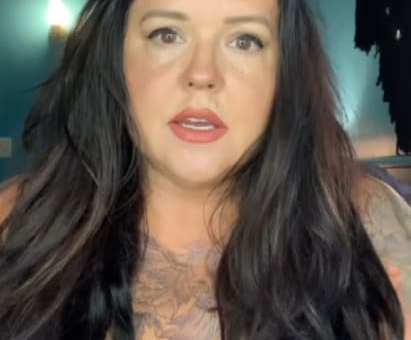 Even long after she last appeared on our television screens, Rebecca Parrott is keeping fans updated.


One of her most recent videos had fans worried after they saw visible tremors in Rebecca’s hands.


This has proven to be a wakeup call for the married reality star.


Rebecca is now promising fans that she has spoken to her doctor and plans to se a neurologist.


Rebecca Parrott is known for her fondness for tattoos.


This week, she took to Instagram to give a shout-out to a product used to help tattoos heal and to bring out their color.


She noted that, in years past, she and others used products that were ultimately bad for one’s skin and for the tattoos themselves.


However, this endorsement ended up getting derailed in the eyes of fans.


Rebecca was clearly seen to be having tremors in her hands during the video.


We have included a video of Rebecca with this post, and the first portion of it will show you Rebecca’s trembling for yourself.


Concerned fans cried out in alarm and flooded Rebecca’s captions with their worries.


Elsewhere on social media, users discussed their suspicions that Rebecca has an unseen health worry.


Speculation ranged everywhere from a major neurological disorder to, well, just a bit of dehydration.


To be clear, Rebecca looks great.


She has lengthy black hair extensions and was showing off her chest tattoo to full effect.


But major health concerns can lurk beneath the surface, unseen except in tiny symptoms that are all too easy for a person to ignore.


Rebecca took to Instagram to explain that she is okay … she thinks.


According to her, a close friend has been urging her to seek medical help for these tremors for quite a while.


Rebecca informed fans that she has now seen a doctor who recommended that she see a neurologist.


Rebecca admitted that she has been largely ignoring the tremors, which are not always as bad as fans saw.


She explained that they have not been impacting her life or her ability to do things so far, so it was easy to put off seeking help.


Rebecca detailed that the tremors seem to be worse at times when she is stressed or anxious.


You can see her expand upon this topic while speaking to the camera in the accompanying video.


Notably, the second video shows her trembling less, highlighting the variation that she experiences.


However, it sounds like the fan attention may have been a wakeup call.


We certainly hope so, anyway.


Rebecca has assured fans that she will consult with a specialist and hopefully get to the bottom of why she is experiencing these tremors.


The good news is that her mildly sweaty glow in the image was not part of a health issue.


Her air conditioning was not working and she is experiencing summer in Georgia.


We would be more concerned if she weren’t sweating, honestly. It’s hot.