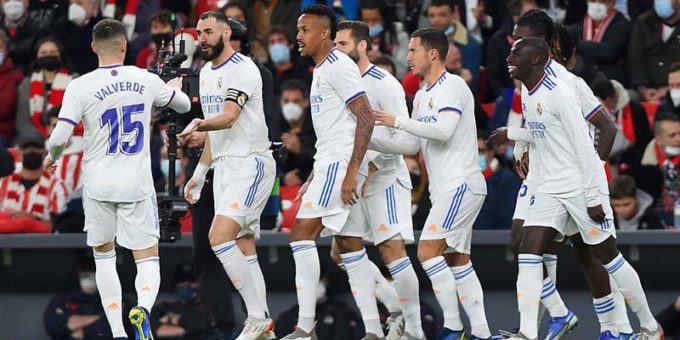 Karim Benzema scored the goals in Real Madrid’s 2-1 win at Athletic Bilbao on Wednesday to send Carlo Ancelotti’s side into the winter break eight points clear atop La Liga.

As Real ended the year with a bang, city rivals and
defending champions Atletico Madrid suffered their fourth straight defeat, a
2-1 reverse at Granada, to leave them fifth but a yawning 17 points adrift.

Benzema ultimately put the fixture out of reach of Real’s
Basque hosts in a matter of minutes, Oihan Sancet pulling one back wth his
speedy 10th minute reply which hit the woodwork before evading Thibaut Cortois.

Benzema’s 14th and 15th goals of the season consolidated his
position at the top of the league’s goalscoring chart.

Atletico would be more than happy to swop trajectories with
Granada for whom this was a third consecutive win in front of their home fans
and their fifth game without loss.

This was certainly not how Diego Simeone envisaged the night
before his 10th year anniversary in charge at Atletico.

What’s more his Portuguese striker Joao Felix had Granada on
the backfoot in the second minute when his low angled shot got the better of
his fellow countryman Luis Maximiano.

Felix had a header arguably harshly disallowed as the first
half drew to a close with Jorge Molina grabbing the winner after the hour mark
for Granada.

Karnataka Minister on Attack On Christians

Economic Growth Won’t Be Impacted Much By Omicron: DPIIT Secretary
2022-01-06

Opinion | What Does the Right Do When Big Business Turns Against Conservatism?
2022-04-27