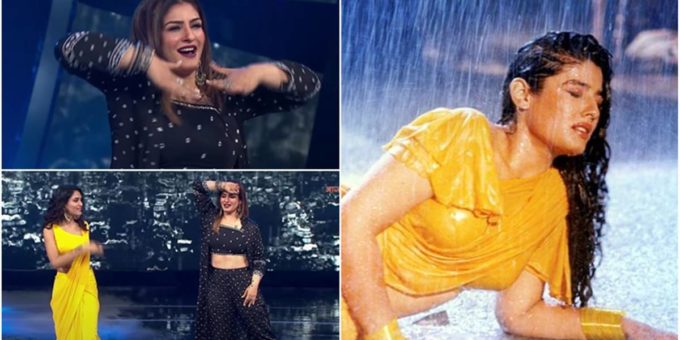 Raveena Tandon’s ‘Tip Tip Barsa Paani’ song remains her one of the most popular tracks. Recently, the song was recreated for Akshay Kumar’s Sooryavanshi where he danced alongside Katrina Kaif. Now, Raveena has reclaimed the song as she performed on it in a recent episode of the singing reality show Sa Re Ga Ma Pa. Apart from ‘Tip Tip Barsa Paani’, the contestants sang several popular tracks of the 47-year-old actor.

In an interview, choreographer-filmmaker Farah Khan had opened up on how Raveena was the first one to heap praises on Katrina Kaif for her performance in the new version of ‘Tip Tip Barsa Pani.’

“Raveena was the first one to call me and say that the song is looking fab and Katrina is looking so good. Even Manish (Malhotra) was of the thought that we go away from the visuals of the original song and he’s made Katrina look like a million bucks. I also don’t think anyone could have done justice to Tip Tip, other than Katrina,” Farah told India Today.

On the work front, Raveena was last seen in Netflix series Aranyak. She is looking forward to the release of KGF season 2. In an interview, Raveena had recently spoken about South’s film industry.

“The Hindi film industry, of course, sometimes has a lot to learn from the South film industry. It is because the South strongly believes in content. But now, I see things are changing. I could say that probably 10 years ago, but now, definitely not. Now, everyone is equal and everyone is at par,” Tandon said in an interview to IndiaToday.in.