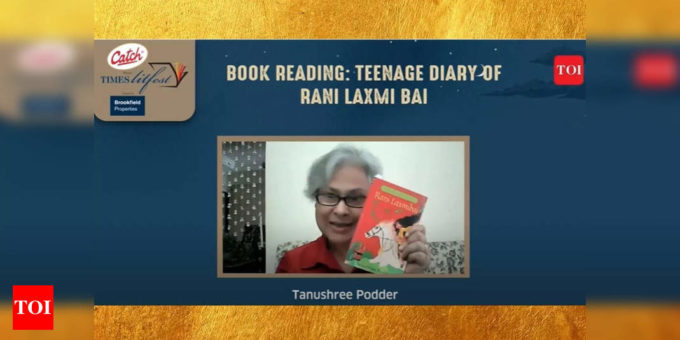 An author who has dabbled with the genres of horror, mystery, history, and military, Tanushree Podder has now come up with her second book for children, called ‘The Teenage Diary of Rani Laxmi Bai’. As the title suggests, in this book the author gives the readers a peek into the lesser-known period of the life of the great freedom fighter, Rani Laxmi Bai. The time which followed her early years in Bithoor but preceded her active years on the battlefield has been documented by the author.

In a session at the Times Litfest 2021, the author read an excerpt from her book for the viewers. The excerpt comprised of a conversation between Rani Laxmi Bai and a group of men that included her father, her husband, her adopted brother, and his friend at her in-laws’ house, and how she copes with the contemporary notions of gender and her new life as a queen and a married woman.

The daughter of a poor Brahmin, Manikarnika, as she was known in her maiden home, got married to the King of Jhansi who employed his father as a courtier. Her adopted brother Nana and his friend Tatya accompanied him and were having a discussion when Manikarnika was summoned. She was agitated and irritated by the customs and restrictions that she was subjected to as a queen and as a married woman. Despite being given equal opportunities at everything, she was married off at the age of 14 to a 40-year-old man whom she revered for allowing her access to every skill she wished to learn but held her freedom in his hands nevertheless.

She often felt envious of her brother and his friend for the luxuries and services that were at their disposal at all times. She would reply to their wistful comments by saying, “I’d rather lead the uncomplicated life of Manu. Being a Rani doesn’t suit my temperament.” Her sorrow at being stripped off of her identity as Manikarnika and having to refrain from the simple joys of life because of her regal status are depicted in the excerpt and the book by Podder, which traces Rani Laxmi Bai’s journey into the warrior queen she aspires to be.

What Is The Right Way To Hold A Submarine Sandwich? This Is What Subway Says

Arjun Patiala promotions: Kriti Sanon impresses in Anita Dongre but lets us down in a Shane & Peacock dress
2019-07-24