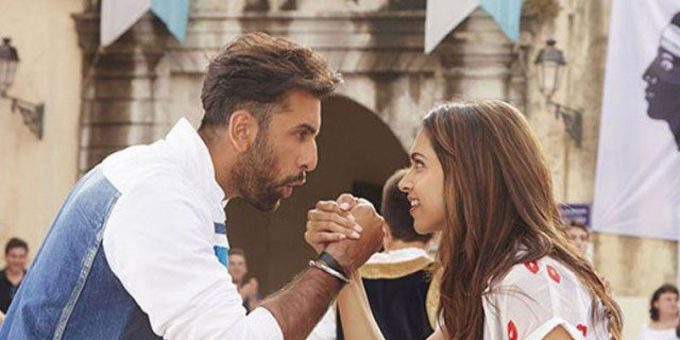 It all started from one dark cinema theatre in Dubai when my life was meant to take a new turn. I have always wondered if the filmmakers realize the impact of Cinema on the audiences’ life. I have no answer to this. Alright, coming back to that evening four years ago. Like many other films I have watched, I also watched Tamasha courtesy my friend M who had already watched it but was eager for me to watch it. One always expects high of an Imtiaz Ali film. Deepika Padukone and Ranbir Kapoor were still a hot couple despite their breakup. The expectations were not sky high but still not low.

Ranbir Kapoor and Deepika Padukone during promotions of Tamasha

The beginning of the film clearly showed me that I was here to stay with it and make the most of my time here. The theatre scene reminded me of my inner calling that I had been curbing for a long time. To be honest, Tamasha slides like a dream. Two young people meeting their soulmates in Ibiza without even knowing their names looks like a dream anyway. Deepika tried hard to find Ranbir all those years but how do you find someone who did not even have a name? However, she found him. What she sought was seeking him. Love had already happened. It was now time to take the things ahead.

It was later when she discovered that the Ranbir she met in India was a different man and this was not the man she loved in Ibiza. It was time to break free. Ranbir was a man stuck in the wrong world. His inner conflict always took over him because he lived the life he was not meant to live. There are some characters that resonate with you and vow never to leave you. Ranbir Kapoor was the one. He chose never to leave me. I still live with it.

Tamasha is not just another film with the good-looking actors and soulful music. It is about self-discovery. Tamasha has helped me become who I am today. Imtiaz Ali’s storytelling enabled me to live the life of Ranbir Kapoor and discover my own self more than Ranbir’s. It helped me identify my battle with my own being because I was walking down the path which was never mine. I know that many people found Tamasha absurd but probably not all of us are willing to accept our truth which lies within us. Tamasha forces you to see the mirror you avoided all those years. Tamasha lives with you forever, like a loyal trusted friend who checks on you every now and then. Thank You, M !

Kriti reveals the ‘Jodhaa Akbar’ scene she’d love to do