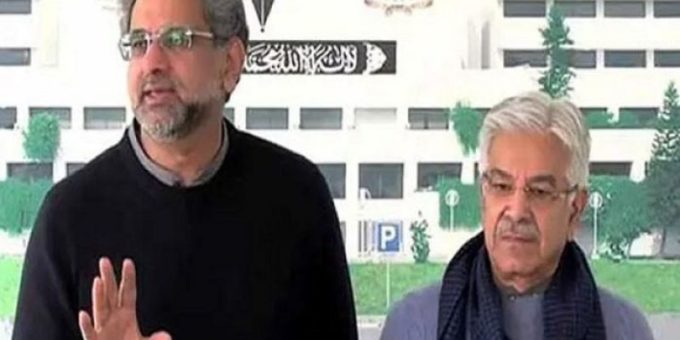 Shamim has alleged that Nisar had given instructions to keep former prime minister Nawaz Sharif and PML-N Vice-President Maryam Nawaz in jail till the general elections in 2018, a claim which ex-chief justice completely denies.

In a press conference with PML-N leader Khawaja Asif, Abbasi said Nawaz was sundered from politics after he was disqualified as the prime minister back in 2017.

“Three people, including Rana Shamin and Saqib Nisar, are aware of the facts, but the people of Pakistan should also know the truth. If someone meddles with elections, so don’t we hold the right to question them?” he said.

Abbasi said when the country’s chief justice could be involved in such practices, then how could justice be delivered in the country.

“I pray that Nisar is not involved in this act. Getting involved in the country’s affairs is unconstitutional […] Nisar had visited hospitals and tried to build dams, thus we have to believe Rana Shamim’s statement,” he said.

Meanwhile, Khawaja Asif said PML-N would raise Shamim’s allegations in the Parliament, as he had recorded his statement “without any coercion”.

Shamim had stated in a notarised affidavit that he had been witness to the then CJP Saqib Nisar’s direction to a high court judge not to release Nawaz and Maryam on bail at any cost before the 2018 general elections.

“Mian Muhammad Nawaz Sharif and Maryam Nawaz Sharif must remain in jail until the general elections are over. On assurances from the other side, he [Saqib Nisar] became calm and happily demanded another cup of tea,” Shamim said in the affidavit as he talked about then top judge of Pakistan.

Reacting to The Newspaper report, former chief justice Justice (retired) Saqib Nisar said the report is “contrary to the facts”, adding that he would not respond to the “white lies” levelled against him by ex-GB chief justice Rana Shamim.

Nisar levelled allegations against Shamim, accusing him of asking for an extension as the chief justice of Gilgit-Baltistan. Nisar added that he had denied him the extension.

“At one point in time, Rana Shamim also complained to me about not getting the extension,” he said.

“It is not wise to respond to every lie,” he added.

Grateful that God gave me Sanjivani to make my TV comeback: Rohit Roy
2019-09-14