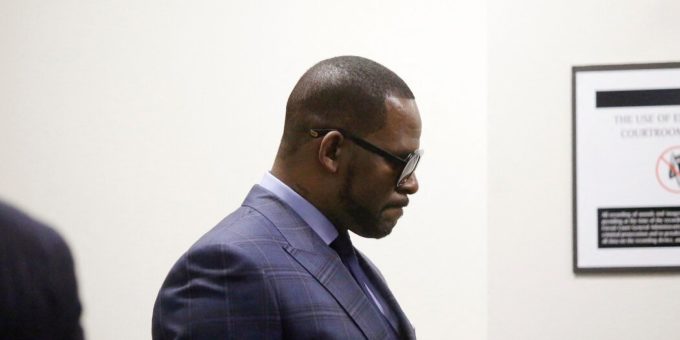 One of the women at the center of the case against him, identified in court only as Faith, contracted the disease around 2018, after she met Mr. Kelly the year before at a concert and began having sex with him, prosecutors said this week. They said that Mr. Kelly did not disclose that he had herpes — and threatened to retaliate after she filed a lawsuit in part because of the herpes diagnosis.

Earlier on Thursday, Ms. Pace testified that when she was 16, the superstar singer who was having sex with her wanted her to dress even younger.

“He wanted me to put my hair up in pigtails and dress like a girl scout,” Ms. Pace, 28, told jurors. She said that Mr. Kelly often requested the outfit before filming their sexual interactions with a camera on a tripod.

Ms. Pace testified that Mr. Kelly — whose reactions appeared muted in court, where he wore a blue suit and a mask — had sex with her over six months beginning in 2009, shortly after she turned 16. She testified that she had initially told Mr. Kelly that she was 19, but after he performed a sex act on her, she revealed her true age and told him that she was a virgin.

That did not lessen Mr. Kelly’s interest in her, she said. He engaged in sexual acts and intercourse with her during several visits to his home in a Chicago-area suburb, she said, where she was forced to operate under severe restrictions and eventually faced violent abuse.

Mr. Kelly’s legal team has moved to cast Ms. Pace as a jealous “superfan” of the singer who concocted lies as he lost interest in her. “You were in fact stalking him, weren’t you?” Deveraux Cannick, one of the singer’s four lawyers, said during his cross-examination on Thursday. (Ms. Pace replied that she was not.)

The defense’s strategy has focused so far on challenging both the nature of the unusual racketeering charges against Mr. Kelly, and arguing that the four women who are expected to testify against him have fabricated or embellished their accounts of his abusive behavior.

Ramappa temple: The Indian shrine that is now a World Heritage site