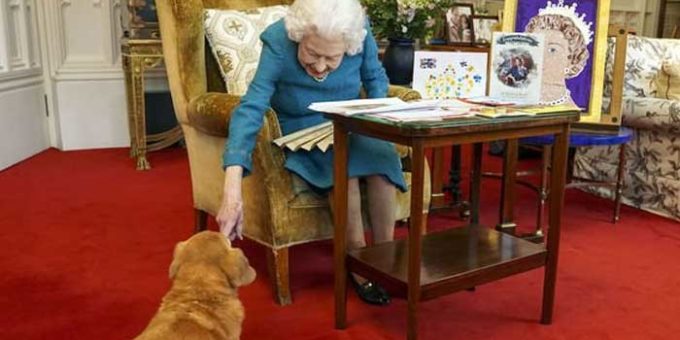 Queen Elizabeth II, who’s all set to mark her Platinum Jubilee on Sunday as 70 years on the throne, has paid a silent tribute to her grandson Prince Harry in new photos.

In pictures released ahead of her Platinum Jubilee, the 95-year-old monarch has appeared to show the Duke of Sussex still remains close to her heart even after his bombshell decision that, somehow, affected the monarchy.

The Queen recently took a look at a few of the cards sent to her over the decades to mark her past Silver and Gold Jubilee and upcoming Platinum Jubilee.

William and Harry’s grandmother can be seen sitting down on an armchair wearing a light blue dress, accessorised with two matching brooches and her signature pearl earrings and necklace while being presented an array of tributes in her honour.

Eagle-eyed royal fans have spotted a few portraits being displayed on a wooden console table behind the monarch while she’s looking at Jubilee memorabilia. Among the most prominent ones, there was a black-and-white photograph of Prince Harry posing alongside his brother Prince William.

This portrait was placed next to one of the official pictures taken by photographer Mario Testino in December 2010 to mark the engagement announcement of the Duke and Duchess of Cambridge.

Queen’s latest picture, released by Buckingham Palace, has also worried some of her fans about her health as she appears to have slimmed down in it. She looks splendid. she has lost weight in recent months as fans noticed the monarch’s watch seems looser on her wrist now than it did in pictures taken less than one year ago.

Gas supply to CNG stations in Sindh, Balochistan to remain suspended for more than 2 months
2021-11-29