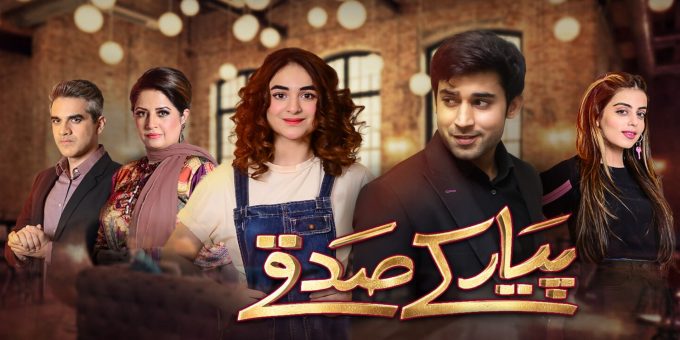 While Pyar Ke Sadqay has been less than impressive in the last couple of episodes, the story not only picks up with episode 8 but takes the show to new heights.  In a brilliant opening scene, Abdullah’s (Bilal Abbas Khan) family gathers to convince Shanzay (Yashma Gill) to marry Abdullah.  What transpires is not only shocking, but also an incredibly well-written scene.  While as viewers, we view Abdullah as an innocent boy who doesn’t mean any harm, Shanzay calls out Abdullah’s behavior for what it is – stalking.  She tells Abdullah’s mother, sister and Phupo about Abdullah’s hundreds of calls from different phone numbers, as well as his threat to marry her by force.  While the ladies are left in shock, Abdullah’s eyes fill with tears, hearing the woman he loves speak about him in this way.

his way this scene has been presented is commendable, shedding light on the inappropriateness of this behavior, regardless of the intention behind it – and making it clear that Shanzay’s anger towards Abdullah is not unfounded, her anger justified.  Stalking is never acceptable behavior, threatening a woman is never okay and it’s refreshing to see a show put that message across.  Despite her anger towards Abdullah, Shanzay remains respectful towards his family.  Yashma Gill is confident and sincere in her performance as Shanzay and one wonders what role she will have to play in the story as the show progresses.

Abdullah is, of course, humiliated by Shanzay’s words and her words echo in his head – words that tell him to marry someone who is less than he is, financially and otherwise, someone who needs him and depends on him.  Abdullah, Mansoora (Atiqa Odho), Washma (Srha Asghar) and Phupo (Sharmin Ali) head to Munshi Ji’s home to attend Mehjabeen’s (Yumna Zaid) wedding.  They’re shocked when Mehjabeen’s fiancé runs away with Mehjabeen’s friend right before the wedding is set to take place.  Abandoned, Mehjabeen sits silent, crying as a spectacle is made of her life, her character, her intelligence and so forth.  Abdullah steps up to defend her and, in a not surprising but exciting turn of events, ends up marrying Mehjabeen himself.  In a hilarious scene, when Abdullah proposes, Mehjabeen tells him that she doesn’t want to go to school anymore and is surprised when he says that’s okay.  At this moment, the audience has that “Rab ne bana di jodi” thought.  The two get married and head home.

Washma and Phupo are seen talking about the marriage later and Washma declares that she will help Mehjabeen groom herself and become the perfect bride for Abdullah.  Abdullah is the perfect partner as they arrive home, trying his best to make Mehjabeen comfortable.  However, when Shanzay calls to find out about his wedding, Abdullah uses Shanzay’s words and refers to Mehjabeen as a “loser” without intending to.  Mehjabeen’s tears spill out as she shares a story about her childhood years in school where she was made to feel like a fool and mistreated by classmates and teachers alike.  Hearing this story not only makes the viewer tear up, but also sheds light on how Mehjabeen has always been treated by those around her – disrespected and made to feel lesser than for being different.  Yumna Zaidi’s performance brings the audience to tears in this scene as her vulnerable side is on full display.  Bilal Abbas Khan and Yumna Zaidi share great chemistry, chemistry which shines through in this episode.  Knowing that Abdullah and Mehjabeen are now married and will be sharing more screen time makes upcoming episodes worth waiting for.  Both actors shine in their respective roles, but as a duo, their acting is only enhanced.

Episode 8 is a thoroughly entertaining one, one that leaves a lasting impression – a perfect episode.  At this point, Sarwar (Omair Rana) is not aware of Abdullah’s marriage or who his new bride is – but all hell will break loose when he does and, unfortunately, it seems the brunt of that will be faced by Mehjabeen when the object of Sarwar’s “affections” is living directly under his roof.

Jordyn Woods Responds to Backlash on Donning an Abaya

Saba Qamar opens up about her thoughts on marriage, wearing a burqa while shopping and freedom
2022-05-14