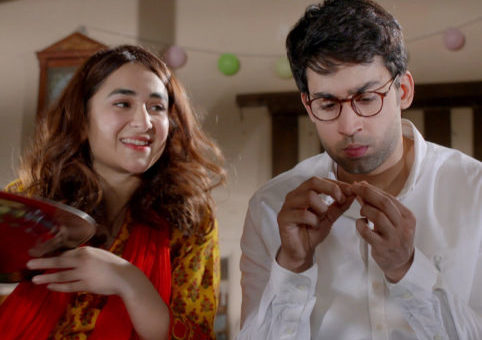 Pyaar Ke Sadqay is a show that focuses on two floundering individuals without a set path in life, played by Bilal Abbas Khan and Yumna Zaidi.  Directed by Farooq Rind, fresh off the success of “Ishq Zahe Naseeb,” the show has been presented as a love story that will be different from tragic shows on air.  Going by the first episode, this rings true and the audience has been introduced to the bubbly Mehjabeen and the naïve Abdullah.

There are a few key tracks in this second episode, the first being Mehjabeen’s (Yumna Zaidi) engagement.  The silly Mehjabeen is taken to the parlor and afterwards, her mother takes her to Sarwar’s (Omair Rana) office, where Mehjabeen’s father works.  While Mehjabeen is waiting, Sarwar enters his office to find her there and is taken with her innocent, blunt demeanor.  After a humorous scene, Mehjabeen and her parents leave and Sarwar is seen thinking about Mehjabeen, thinking that she is the kind of girl who once used to be his ideal.  It’s clear here that his intentions are not good.  Omair Rana is an incredible actor regardless of the role, but with the way his character is shaping up in the first two episodes, it’s guaranteed that viewers will be treated to a power-packed antagonistic performance.

It’s shown that Sarwar, who is Abdullah’s stepfather, married Abdullah’s mother for money.  Not only this, the reason Abdullah’s sister (Srha Asghar) does not like her stepfather is because, as a child, she overheard him discussing his plans to marry her mother along with his plans for Abdullah, making him so helpless that he won’t be able to stand on his own feet.  It becomes clear now that this girl is well aware of Sarwar’s devious plans and, despite feeling neglected because of her mother’s focus on Abdullah, she loves both her mother and brother and struggles to protect them.

While Abdullah (Bilal Abbas Khan) continues to pursue Shanzay (Yashma Gill), she turns him down – and turns him down, and turns him down.  With Abdullah not willing to take no for an answer, Shanzay begins receiving calls from him from different numbers and is clearly frustrated.  Abdullah is a sweet, well-intentioned guy and it would be humorous to watch this if one didn’t feel so sorry for him.  Bilal Abbas Khan’s ability to make the switch from a character like Jamal (Qurban) to Wajih (Cheekh) and now Abdullah, he proves his value as an actor time and time again.

When Mehjabeen’s proposal comes from the doctor, Mehjabeen hilariously bluffs her way through the questions from her to-be mother-in-law and then eagerly accepts the proposal herself.  However, while she is now engaged, her doctor fiancé (Khalid Malik) calls her and quickly realizes that Mehjabeen is not the type of girl he was looking for.  Yumna Zaidi’s comedic timing is on point in this episode, keeping the viewer in splits, which is supported by Salma Hasan’s acting as Mehjabeen’s mother.

While the first episode featured more of Bilal Abbas Khan, episode 2 focuses more on Yumna Zaidi’s Mehjabeen.  However, the viewer doesn’t feel a lag in the pace at all as Yumna lights up the screen and keeps the feel of the show light despite some heavy reveals.  Everything from the direction, the acting and the editing keeps the viewer glued to the screen.  One can only hope the pace of the show stays on this track – if so, this show is set to be a winner.

Lori Loughlin: I’m Not Going to Prison! I Have a Trick Up My Sleeve!

The Ban on Bollywood Films is Pinching the Pakistani Entertainment Industry, Say Reports
2019-03-13