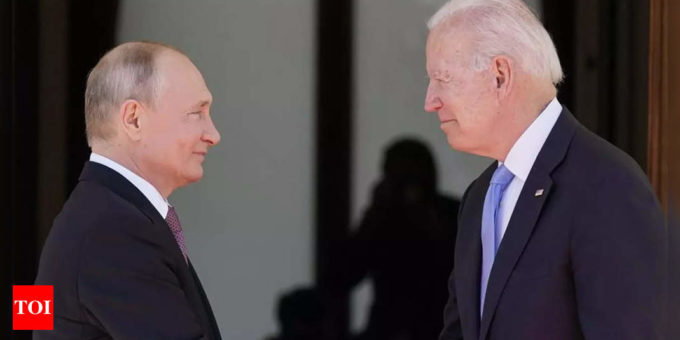 WILMINGTON: Presidents Joe Biden and Vladimir Putin are set to discuss the Russian troop buildup near Ukraine during their second call in recent weeks amid little progress toward ending the smoldering crisis.
Ahead of Thursday’s call, the White House indicated that Biden would make clear to Putin that a diplomatic path remains open even as the Russians have moved an estimated 100,000 troops toward Ukraine and Putin has stepped up his demands for security guarantees in Eastern Europe.
But Biden will reiterate to Putin that for there to be “real progress” in talks they must be conducted in “a context of de-escalation rather than escalation,” according to a senior administration official who briefed reporters ahead of the call. The official spoke on the condition of anonymity.
The call has been set up per Putin’s initiative, Kremlin spokesperson Dmitry Peskov said Thursday. It comes as senior US and Russian officials are to hold talks on Jan. 10 in Geneva.
The two leaders earlier this month held a video call in which their conversation focused heavily on Russia’s troop movements that have unsettled Ukraine and other European allies as well as Moscow’s demand for security guarantees precluding NATO from expanding to Ukraine.
“The goal of the conversation is clear — to continue discussing the issues that were on the agenda during the recent conversation via video conference,” Peskov told reporters, adding that issues related to the January talks will be also discussed.
Peskov noted that since the call, Moscow has submitted its security proposals to U.S. and European officials and now “from our point of view, from the point of view of president Putin the need has arisen for another telephone conversation, which would preface the upcoming talks.”
The official said Biden and Putin, who met in Geneva in June to discuss an array of tensions in the U.S.-Russia relationship, were not expected to take part in the coming talks.
In the Dec. 7 video call, the White House said Biden put Moscow on notice that an invasion of Ukraine would bring sanctions and enormous harm to the Russian economy. Russian officials have dismissed the sanction threats.
Moscow and NATO representatives are expected to meet shortly after the upcoming Geneva talks as are Russia and the Organization for Security and Co-operation in Europe, which includes the United States.
Earlier this month, Moscow submitted draft security documents demanding that NATO deny membership to Ukraine and other former Soviet countries and roll back its military deployments in Central and Eastern Europe.
The U.S. and its allies have refused to offer Russia the kind of guarantees on Ukraine that Putin wants, citing NATO’s principle that membership is open to any qualifying country. They agreed. however, to hold talks with Russia to discuss its concerns.
As Biden prepared for talks with Putin, the administration also sought to highlight the commitment to Ukraine and drive home that Washington is committed to the “principle of nothing about you without you” in shaping policy that affects European allies.
Secretary of State Antony Blinken spoke on Wednesday with Ukrainian President Volodymyr Zelenskyy. State Department spokesperson Ned Price said Blinken “reiterated the United States’ unwavering support for Ukraine’s independence, sovereignty, and territorial integrity in the face of Russia’s military buildup on Ukraine’s borders.”
Biden and administration officials also plan to consult with European allies after the president speaks with Putin to offer them a readout of the engagement.
Putin said earlier this week he would weigh a slew of options if the West fails to meet his push for security guarantees precluding NATO’s expansion to Ukraine.
In Thursday’s call, Biden is expected to stress to Putin that the U.S. is united with its allies but will demonstrate a willingness to engage in “principled diplomacy” with Russia, the administration official said.
In 2014, Russian troops marched into the Black Sea peninsula of Crimea and seized the territory from Ukraine. Russia’s annexation of Crimea — one of the darker moments for President Barack Obama on the international stage — looms large as Biden looks to contain the current crisis.
White House national security adviser Jake Sullivan has made clear in public comments that the administration is ready to discuss Moscow’s concerns about NATO in talks with Russian officials, but emphasized that Washington won’t go behind the backs of European allies in shaping policy that affects them.
The two leaders are also expected during Thursday’s call to discuss efforts to persuade Iran to return to the 2015 nuclear accord, which was effectively scrapped by the Trump administration.
Despite differences on Ukraine and other issues, White House officials have said the Iran nuclear issue is one where they believe the U.S. and Russia can work cooperatively.
Biden, who is spending the week in his home state of Delaware, is expected to participate in the call from his home near Wilmington.

China bans its national football players from getting tattoos