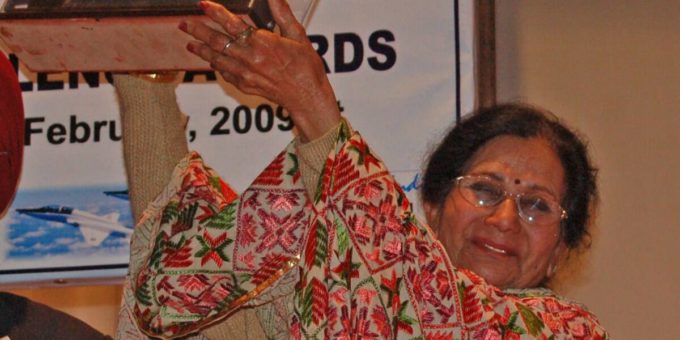 “She was taken to the hospital on Saturday evening after she complained of difficulty in breathing,” Sandhu told PTI.

Gurmeet Bawa, wife of Punjabi folk singer Kirpal Bawa, was best known for her long ‘hek’ (opening of a song while singing to create a melodious voice with an unbreakable wave) for about 45 seconds.

She came to limelight when she started performing on Doordarshan. She was the first Punjabi female singer to appear on the national television channel.

Born in 1944 in Kothe village of Punjab’s Gurdaspur district, Gurmeet Bawa became popular across the country after singing the Punjab folk song “Jugni”.

“Shocked and saddened to hear the news of Gurmeet Bawa Ji’s demise. Her contribution to Punjabi folk music is indelible. My sincere condolences, thoughts & prayers are with her family,” Channi posted on Twitter.

In a statement, Randhawa said Gurmeet Bawa “carved out a niche for herself with her soulful and melodious voice and served the Punjabi folk music for more than half a century.”

“Heartfelt condolences on the demise of legendary Punjabi singer Mrs. Gurmeet Bawa Ji. Her contribution to the Punjabi musical industry, and achievements will always be remembered. May Guru Sahib grant peace to the departed soul & strength to the family members to bear the loss,” said Sukhbir in a tweet.

Harsimrat said, “Deeply saddened to know about the passing away of veteran singer Gurmeet Bawa Ji. The Shiromani Gayika awardee will always be remembered for glorifying Punjabi folk on int’l platforms. Legends never die, they continue to live in their works. My sincere condolences to her family.”

Gurmeet Bawa is survived by her husband Kirpal Bawa and two daughters — singer Glory Bawa and Simran Bawa. Her third daughter Lachi Bawa, who was also a folk singer, died of cancer in February last year.

The singer’s cremation will take place on Monday.

On Camera, Car Swerves To Save Monkey, Skids And Falls Off Road In Shimla

Scuffle between PML-N leaders, PTI workers outside the Parliament
2021-03-06