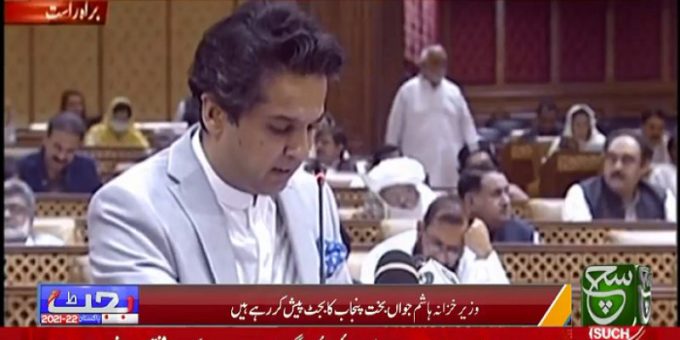 The Punjab government on Monday approved the proposed budget for the fiscal year 2021-22 today with an estimated total budget outlay of Rs2.653 trillion, including an Annual Development Programme (ADP) worth Rs560 billion.

The Punjab Cabinet also approved the much-anticipated 10% increase in salaries and pension of provincial employees and also greenlighted the decision to increase the minimum wage of workers from Rs17,500 to Rs20,000.

In the cabinet meeting, the Board of Revenue proposed to increase the agricultural tax. However, the Chief Minister of Punjab Sardar Usman Buzdar and the Punjab Cabinet unanimously rejected the suggestion.

“The proposed budget has measures to give relief to the common man,” CM Buzdar. “All targets are realistic and all priorities have been set in accordance with the needs of the masses.”

The chief minister added that the budget is not a “magic of statistics” but is a document based on development.

Taking a jibe at the Opposition, the chief minister said: “The job of the incompetent and failed Opposition is just to make noise. Criticising the government’s positive policies only for the sake of criticising make them look bad.”

The budget session was the maiden one in the newly-constructed building of the Punjab Assembly. The total outlay of the budget has increased by more than 18% and the development budget has gained 66% compared with the current fiscal year.

The Punjab government has fixed the target of more than Rs400 billion of provincial revenue (both tax and non-tax revue) for the fiscal year 2021-22, which is 28% higher than the ongoing fiscal year target. This reflects that the economy of Punjab has been battling the COVID-19 impact and economic managers are anticipating quick growth and economic activities in the coming fiscal year.

For the first time in the history of the province, a separate annual development plan to the tune of Rs189 billion is allocated for south Punjab, while these schemes would also be published in separate budget books.

The government has allocated over Rs200 billion for the social sector, including health and education sectors, Rs145 billion for infrastructure development, over Rs55 billion for production sectors including agriculture, industry, tourism, wildlife, fisheries, forest, and more than Rs90 billion for special programmes.

The government has decided to give a blanket cover of health insurance card to the entire population of the province and has allocated Rs80 billion for the project. A long-awaited air ambulance service project will also be initiated with initial seed money.

The government has also allocated over Rs28 billion for the mega projects of Lahore, including the establishment of a new 1000-bed modern hospital in the city, a surface water treatment plant, underpasses, and flyover projects.

The government has earmarked Rs3.5 billion for industrialisation in the province and completion of work in the existing industrial estates. Moreover, Rs10 billion has been set aside for soft loans of the Punjab Rozgar Scheme.

In order to control artificial inflation, the government has established the Model Bazaar Authority and allocated Rs1.5 billion for the establishment of model bazaars across the province. The government has made a Rs58 billion allocation for road infrastructure in the budget 2021-22. Other than this, Rs39 billion will be spent from the Public Sector Development Programme (PSDP) and Rs8 billion allocated under CM Road Rehabilitation Programme. In total, over Rs100 billion will be spent on road infrastructure in Punjab in the next fiscal year.

For low-income housing project, Rs3 billion is allocated in the budget under the peri-urban housing scheme. For water and sanitation projects, the government has allocated Rs9 billion through which it will establish wastewater treatment plants in Lahore, Faisalabad, Sialkot, and other megacities alongside solid waste management and drinking water projects.

As for environmental protection, an allocation of Rs4 billion has been made out of which Rs2.5 billion will go to the Prime Minister’s flagship 10 Billion Tree Tsunami Project.

On the other hand, PTI MPAs and allies have vowed to extend complete support to the government for passage of the annual budget 2021-22.

The meeting was attended by PTI MPAs, including those who belong to the Jahangir Khan Tareen group, PMLQ MPAs as well as Punjab ministers. The CM told the meeting Pakistan was now entering an era of progress under the leadership of Prime Minister Imran Khan.

He said Punjab was facing severe financial losses when the PTI took over, but now a new era of prosperity was beginning.