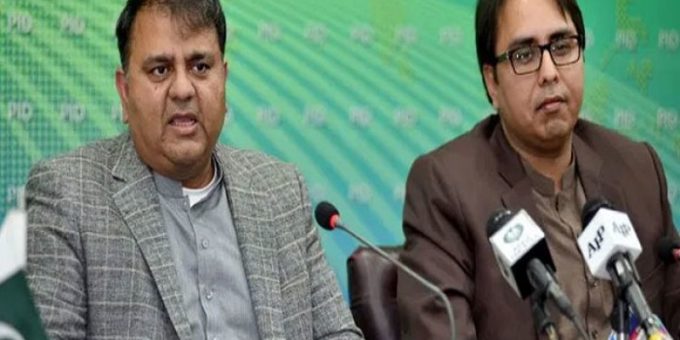 Speaking to media in Lahore alongside Special Assistant to the Prime Minister on Political Communication Dr Shahbaz Gill, Chaudhry said:

“Instead (of celebrating), they [PPP and PML-N] should have visited their party workers in KP to boost their morale. They should have done national politics,” the information minister said.

In the elections held in the 17 districts of KP on December 19, the PTI, which has been in power in the province since 2013, showed a dismal performance, conceding ground to the the Jamiat Ulema-i-Islam Fazl (JUI-F).According to the provisional results of 47 of the 63 tehsils declared by the Election Commission of Pakistan, the JUI-F won 17 seats of mayor/chairperson while the PTI came in second by securing 12 seats. Independent candidates grabbed the third highest number of seats at seven, followed by Awami National Party at six, PML-N at three and Jamaat-i-Islami, Pakistan Peoples Party (PPP) and Tehreek-i-Islahat Pakistan bagging one seat each.

In provincial capital Peshawar, the JUI-F stunned the PTI with a definitive lead in the contest for the mayor of the city. JUI-F candidate Haji Zubair Ali secured 62,388 votes against 50,659 votes secured by PTI’s Rizwan Bangash.

However, Chaudhry claimed on Thursday that it had been proved after the elections that the PTI was the largest party in KP’s village councils, adding that the two biggest opposition parties in the National Assembly, the PPP and the PML-N, “did not get any votes there [in KP]” and that they are “celebrating the end of their parties”.

“And we are competing against political dwarfs,” he continued. “We are facing the PPP in some areas [of the country], the PML-N in other areas and competing against the JUI-F at some places. None of them have a man of Imran Khan’s stature.”

He further commented that the “so-called politics of big [opposition] parties has been surviving only because of television coverage.”

Their politics, he said, would end if they were not given any television coverage for two to four days as “there is no one from among them on the ground”.