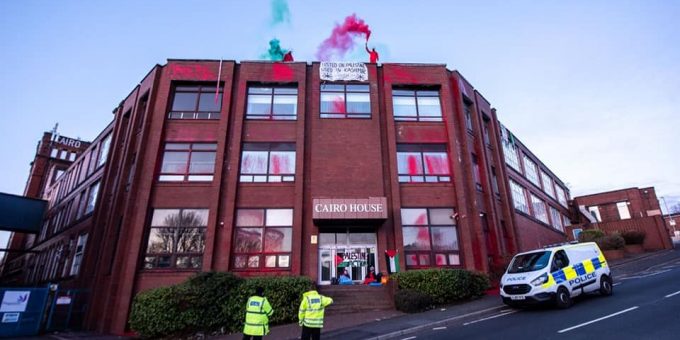 Protestors climbed onto the roof of an Israeli-owned weapons factory in Oldham and sprayed paint onto the walls and smashed windows.

The Elbit Ferranti factory on Greenacres road, Waterhead was invaded by demonstrators at six o’clock in the morning (April 13). Police arrived and made two arrests.

Activists are from the direct action group Palestine Action. They have also spray painted a police van and broke inside the factory to fully occupy the factory premises for the first time.

Some activists chained themselves to the premises and used barrier tape across the front doors of the building. They have displayed banners with slogans such as ‘War Crime Scene’ and ‘Elbit’s arms: Tested on Palestine, used in Kashmir.’

This is the first time activists have taken over the inside of the Elbit factory, occupying it completely from top to bottom, inside and out.

Elbit Systems has 10 sites in the UK, including factories and offices. The protests have taken place simultaneously at the Bristol headquarters along with the action at the Oldham branch of the weapon’s firm.

Palestine Action stated: “Elbit has absolutely no place in any civilised society and their existence is an utter stain on the UK.”

“All those in positions of power who facilitate or invest in their industry, or turn a blind eye to their murderous technology, should hang their heads in shame.”

A spokesperson for Oldham Peace and Justice said: “We support the closure of Elbit Ferranti although we aren’t involved in the direct action, we believe in raising awareness about what is happening in Oldham. People need to wake up to the killing and suffering caused by weapons manufacturers.”

At the scene were four ambulances, ten police cars, a fire engine and two tactical unit vans. There is a group of about ten people at the scene which is steadily growing. There are around 3-4 people on the roof and it is believed there are more inside.

The protests come after the Ministry of Defence confirmed that Elbit Systems had received a contract worth £102 million for a surveillance system that will allow soldiers to detect and shoot targets within a matter of seconds.

Elbit Ferranti were contacted but were unavailable for comment.

Netizens Praised Furqan Qureshi For His Tremendous Performance In Aulaad