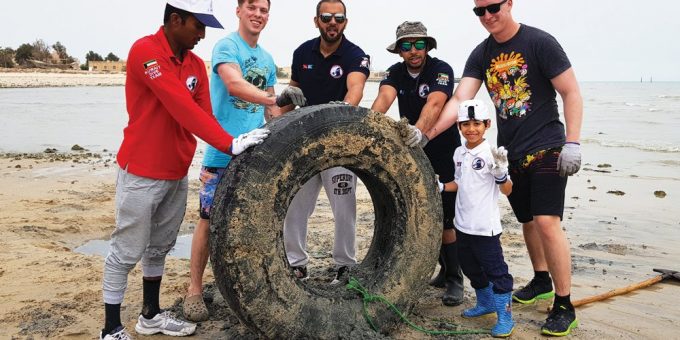 KUWAIT:  Dr. Dari Alhuwail is a true modern-day hero. When he is not working as an assistant professor at Kuwait University’s Department of Information Science, he is with the Kuwait Dive Team, plunging deep into the sea to protect the country’s marine environment.

“I am saying this in all honesty and without the tiniest bit of cheesiness or corniness: we are ‘Team Mission Impossible’,” he said with the unmistakable pride of someone who has been associated with the volunteer diving team for close to 13 years now.

The Kuwait Dive Team is a group of diving professionals committed to protecting the marine ecosystem through salvage operations.

Officially, Alhuwail handles international relations, communicating with associations such as Project AWARE and Ocean Conservancy, but he also takes regular trips to monitor the corals and clear sea debris.

Alhuwail’s relationship with the team goes back to his high-school days, when he saw press releases of the Dive Team’s initiatives for picking up marine debris, sunken boats and beach trash.

“For me, their efforts symbolized something greater,” he said.

“All of the work that we undertake essentially involves protecting Kuwait’s coral reefs because the reefs are one of the most important elements in the marine world.” Alhuwail said.

“For example, on a regular day, we lift sunken boats and vessels, move debris and ghost nets from the waters and moor buoys to safeguard the reefs so that the boats don’t anchor there.”

In 2010, Kuwait experienced its worst coral bleaching season, with almost 80 percent of its reefs affected. Alhuwail says they are now recovering, but more effort is needed to reclaim what is lost.

“We have a coral transplantation project in place where we try and build new homes for the reefs, and we have artificial reef installations around Kuwait.”

Alhuwail cites amateur diving and spearfishing around the reefs as some of the human activities that can damage these areas.

“Amateur divers have lesser control over their buoyancy, and sometimes when you swim too close your fin breaks off a coral — it might have taken 10 or 20 years for that bit to grow.”

“No, we are not your regular 911,” said Alhuwail trying to explain the range of work he undertakes as part of the Dive Team.

However, the members do respond to some calls, for example about sunken boats that pose a threat to passing vessels. Even then, many factors need to be considered before the team sets out.

“The sea has certain rules that need to be observed — high tide, low tide, wind speed and direction, wave height, and add to that the things we need to do our homework on — location of the operation, threat to life, additional resources requirement and so on.”

• This report is being published by Arab News as a partner of the Middle East Exchange, which was launched by the Mohammed bin Rashid Al Maktoum Global Initiatives and the Bill and Melinda Gates Foundation to reflect the vision of the UAE prime minister and ruler of Dubai to explore the possibility of changing the status of the Arab region.