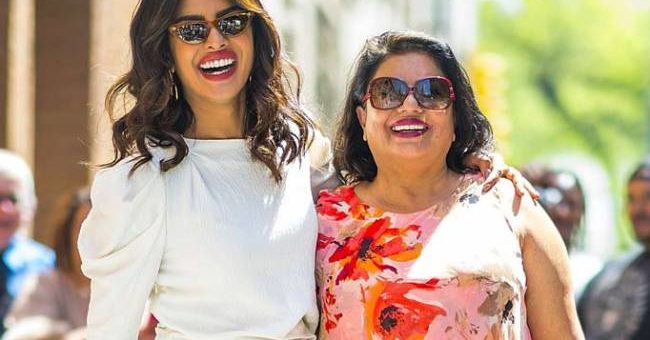 Priyanka Chopra fell prey to a lot of flak when she attended the Grammys last week. The starlet became the target of netizens when she appeared on the red carpet in a Ralph and Russo gown that featured an exaggeratedly plunging neckline. While the Quantico star exuded radiance and confidence, she was heavily body shamed and trolled for her choice of ensemble. PeeCee, however, remained unfettered by the hate. Echoing her sentiments, Priyanka’s mother Madhu Chopra also shared she was glad the controversy around Priyanka’s dress happened in the first place. And her reason was something any mother would give!

Madhu said, “I loved the dress. She showed me the sample before she wore, I thought it was a little risqué but she carried it well and she was one of the best dressed. I am happy about that.” About the hullabaloo that followed, Madhu added, “I am glad it happened because I feel it made her stronger. She lives life on her own terms as long as she is not harming or hurting anybody. It’s her body she can do what she wants and she has a beautiful one too. I sent her a saying that says ‘It’s my life’. Whose life am I living, yours or mine? I can do what I want, right? I think that is the philosophy that everybody should follow.”

Slamming internet trolls, Madhu stated, Trolls are anonymous people hiding behind computers. They don’t have joy in their lives, I think. They think they get attention because of the bad things they say. They don’t mean to say bad things but they get attention. I don’t give much weight to the trollers.” Weighing in on her Grammys attire, Priyanka said, “When I decide to wear an outfit I’m not someone who’s really nervous because when I walk out of the door, I’m very secure. I don’t leave unless I’m super secure.” She continued, “So as much as people might think it would be hard to manage, they found this incredible tulle the same colour as my skin tone and sort of held the dress together with that. So you can’t even see it in the pictures but there was no way it would have happened if they didn’t have that. It was like netting.”

3 dead, 2 injured after shooting at Airbnb in downtown Toronto