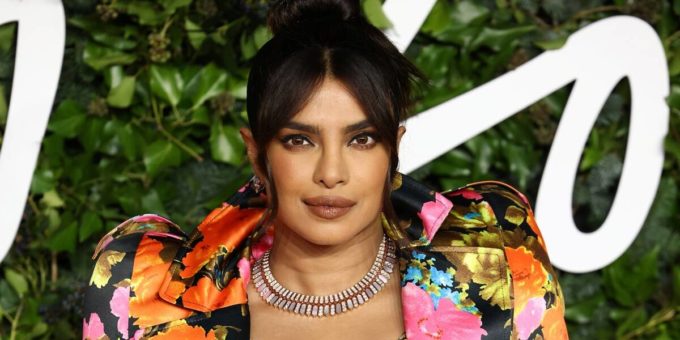 The Royal Albert Hall in London laid out the red carpet for fashion’s who’s who on the occasion of The Fashion Awards 2021. The event celebrated some of fashion’s greatest moguls, creatives, designers and was joined by a star studded guest list.

In attendance were Priyanka Chopra Jonas and Nick Jonas who cut an adorable picture as they indulged in PDA, dispelling all the recent rumours on their separation after the Quantico actor dropped ‘Jonas’ from her Instagram handle.

The couple’s fashionable red carpet looks have long been a paparazzi and fashion police favourite, and last night was no different.

While Nick sported a black and red Maison Margiela suit, Priyanka made a bold sartorial statement as she opted for a Richard Quinn number covered head-to-toe in bold floral prints.

Priyanka Chopra poses on the red carpet at the Fashion Awards 2021. (REUTERS/Henry Nicholls)

The fitted jumpsuit was gathered at the neck and was accompanied by a voluminous coat that had a long train. She accessorised the look with Bulgari jewellery. The designer was a nominee for the BFC Foundation Award for emerging talent.

Nick Jonas also shared their pictures on his Instagram account, calling Priyanka “The star of the show”.

The couple were last seen together on the Jonas Brothers Family Roast. Priyanka had posted a loving picture on Thanksgiving with her husband, writing, “So much to be grateful for. Friends, family.. I love you @nickjonas”.

Ragi Cutlet Recipe: This Delicious Cutlet Makes An Ultimate Snack To Have With Evening Tea

“Different Version Of Me On The Field”: Virat Kohli Reacts To Being Retained By Royal Challengers Bangalore