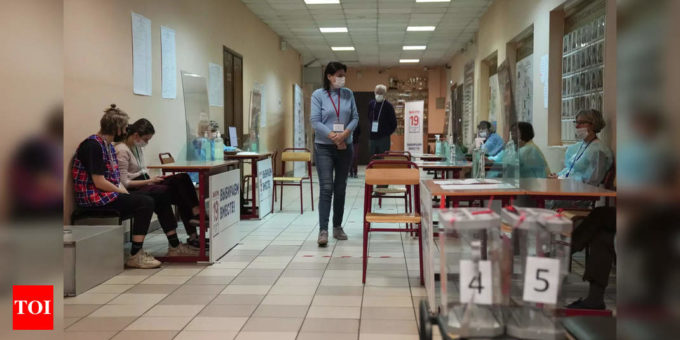 MOSCOW: Russia’s three-day parliamentary and local elections close on Sunday, with most Kremlin critics banned from running and the ruling United Russia party expected to retain its majority.
From spoiler candidates to TV personalities, here are five types of candidates that Russians will see on their ballots on the last day of voting:
With United Russia facing historically low popularity ratings, the Kremlin sought to revamp its image and introduce fresh faces.
Among them is doctor Denis Protsenko, who is in charge of Moscow’s main Covid-19 hospital and a symbol of the fight against the coronavirus.
He initially refused the nomination, but after a call from President Vladimir Putin, the 46-year-old stepped forward.
Another new name is Maria Butina, who in 2018 was sentenced to 18 months in prison in the United States for illegally acting as a foreign agent for Russia.
After her deportation, the 32-year-old gun rights activist became a frequent guest on state television and now co-hosts a show on RT, a Kremlin-funded TV channel.
This year, she took a film crew to the prison of Kremlin critic Alexei Navalny — then on hunger strike and demanding medical care — comparing his conditions in jail to a summer camp.
Nearly all vocal Kremlin critics were barred. Ahead of the polls, organisations linked to top Putin critic Navalny were labelled “extremist”, preventing his allies from balloting.
Navalny himself barely survived poisoning by nerve agent last summer and was jailed on old fraud charges in February.
Kremlin critic Andrei Pivovarov, who is running for parliament, was hauled off a flight and detained.
The 39-year-old campaigned from behind bars in the southern city of Krasnodar, with the help of his lawyer and volunteers.
The former executive director of the now-disbanded group of Putin critics Open Russia, Mikhail Khodorkovsky, faces up to six years in prison for his involvement in an “undesirable” organisation.
Darya Artamonova, 19, an independent candidate running for city council in the Siberian town of Berdsk, said she has received numerous threats, including a funeral wreath sent to her parents.
The use of spoilers — non-winning, often similarly named candidates who run to weaken support for a popular politician — is a common tactic.
In Saint Petersburg, the ploy was taken to the extreme.
Opposition politician Boris Vishnevsky, who is running for re-election to the regional parliament in Russia’s second city, is competing against two others named “Boris Vishnevsky” and who, like him, are balding and sport a short salt-and-pepper beard.
Moscow-based opposition politician Ilya Yashin, who was barred from running, said he too has a rival with the same surname.
Yashin said that candidate does not have his picture or first name, Alexei, on campaign posters in an apparent attempt to confuse voters.
In a central Moscow district — home to the Kremlin, parliament and many ministries — the ruling party appears to have no candidate.
But the opposition believes political novice Oleg Leonov — who runs a volunteer organisation that searches for missing people — has been put forward by United Russia. He denies such links.
Two of Putin’s highest-profile allies — Defence Minister Sergei Shoigu, 66, and Foreign Minister Sergei Lavrov, 71 — head the candidates’ list for the ruling party.
Both have high approval ratings and their presence on the list aims to boost turnout.
According to state-run pollster VTsIOm, fewer than 30 percent of Russians say they are planning to vote for the ruling party, down from more than 40 percent in the last lower house polls in 2016.
In Russia’s tightly controlled political system only Kremlin-friendly token opposition candidates are allowed to run for parliament.
Besides the ruling party, the other main forces in the rubber stamp parliament are the Communist Party, the nationalist Liberal Democratic Party (LDPR) and the left-leaning A Just Russia.
They are allowed to criticise the dominant party but all are expected to toe the Kremlin line and support Moscow’s policies, be it the pension age hike or constitutional amendments that allow Putin to extend his hold on power until 2036.

Aukus: What will nuclear-powered submarines mean for Australia?

Contradictory clarifications by officials on suspicious US flight
2019-07-15