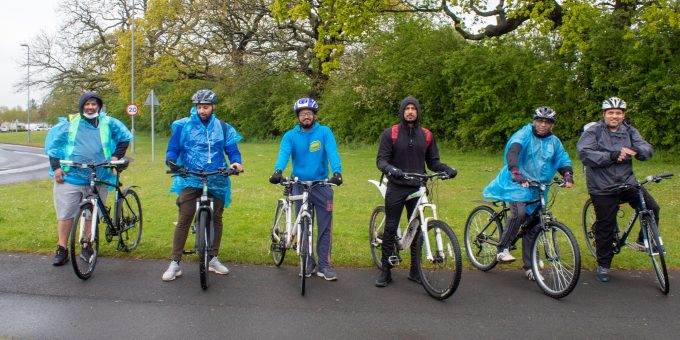 Cyclists completed the 33km route around the city of Preston and have so far raised more than £16,000.

India is experiencing an unrelenting surge in infections and deaths from the coronavirus pandemic, with its hospitals coming under extreme pressure from shortages of oxygen and critical care beds.

The Preston Temple was inspired by the work of BAPS Shri Swaminarayan Mandir, London, popularly known as ‘Neasden Temple’ which had earlier launched an emergency campaign to support the BAPS relief efforts in India on 24 April 2021.

As a part of this initiative, BAPS began a ‘Cycle to Save Lives in India’ campaign on 28 April 2021 – a 48-hour, non-stop static relay cycle challenge. It aimed to cover 7,600 kilometres – the distance between London and Delhi – but ended up almost tripling that by cycling 20,127 kilometres!

787 participants, as part of a relay, cycled during the day and throughout the night from Saturday 1 May to Monday 3 May at BAPS Swaminarayan mandirs in London, Chigwell and Leicester.

Their collective efforts, sponsored by more than 14,000 donors, raised over £600,000 – every penny of which will be directed towards the life-saving relief efforts in India. The event was delivered in a fully Covid-safe environment.

Ambrish Limbachia, a volunteer at BAPS Shri Swaminarayan Mandir in Preston said, “The situation in India is truly heart-breaking. We all want to help and what a wonderful opportunity to support the cause.

“We are humbled by the response and support that has been received for the events at London, Leicester and Chigwell. We are delighted that Preston can continue this great work and hope the people of Preston can donate generously to this cause to save lives in India.”

Dr Mayank Shah, a trustee for BAPS, said: “We’ve been blown away by the incredible support of the community. More than 14,000 people have donated to this cause! We’d like to say a huge ‘thank you’ to each and every one of these supporters as well as all of our cyclists and tireless volunteers for making this event so fruitful.”

Yogvivekdas Swami, head of the mandir in London, also said, “It’s a tragedy anywhere in the world when lives are being impacted by this deadly virus. We have to work together as one human community, because, ultimately, the only way we will be safe here is if everyone is safe everywhere.”

BAPS volunteers in Preston are furthering this work with an additional event. Every penny raised through this Challenge will reach the relief efforts in India.

Is Salman Faisal’s Marriage Coming To An End?

What is Obsessive Love Disorder? Symptoms, causes and treatment
2020-10-15