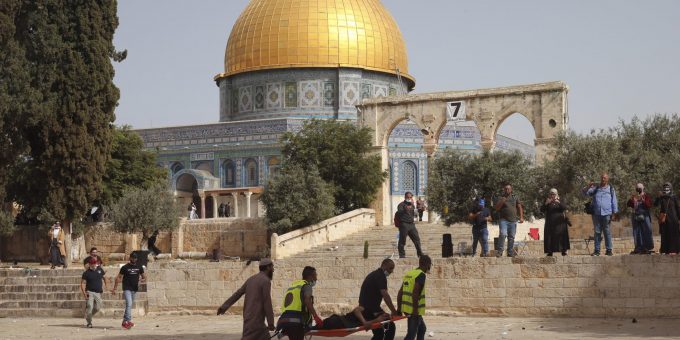 Preston mosques and Islamic Institutions have released a joint statement condemning the actions of the Israeli forces in Palestine.

As Ramadan came to a close, Israeli forces raided the Masjid al Aqsa and more than 80 people were injured in the first incursion on Friday.

Israeli police then clashed with Palestinian protesters outside Jerusalem’s Old City during the holiest night of Ramadan in a show of force. The brutal crackdown came after police had blocked busloads of men, women and children headed to Jerusalem for prayer at Islam’s third holiest site.

Further scenes of violence overnight saw twenty people including nine children have been killed in the Gaza Strip according to Palestinian health officials. At least seven members of one family, including three children, were killed in an explosion in northern Gaza.

The statement says: “All places of worship, regardless of faith are safe sanctuaries for the sole purpose of private and collective worship. It is unacceptable that they become a place of violent conflict, disorder and bloodshed.”

It adds: “Masjid Al Aqsa is the one of the most sacred sites in the Muslim world and it was heart breaking to see the images and videos which were being circulated last Friday. The pain was further compounded by the fact this incident was carried out in the holy month of Ramadan.”

Full statement can be read here

Housefull 4: Akshay Kumar and Rana Daggubati to face off in a qawwali song with entire cast | Bollywood News
2019-08-21

AstraZeneca shots should be halted for over-60s too: European Medicines Agency
2021-06-13