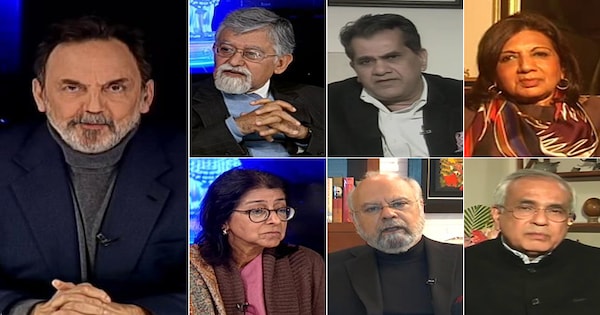 Finance Minister Nirmala Sitharaman, in the longest-ever Budget speech, unveiled a new direct tax regime, enhancing tax rebate for the middle income group. Another major highlight of the Budget speech was the announcement of the centre’s plan to sell some of its stakes in Life Insurance Corporation via IPO. The government says the Budget will aid spending and would revive the economy. Congress leader Rahul Gandhi, however, found the Budget to be hollow. The big question is: Will the Budget revive the flagging economy? NDTV’s Dr Prannoy Roy examines with his panel of experts.

Dr Omkar Goswami, Chairman, CERG Advisory Private Limited: It’s a budget without any direction, structure. It’s one of the worst budgets in the last 30 years if not the worst.

It was a very, very disappoint budget. It had no direction.

India has fallen in the global hunger index – can you believe it?

We are talking about the qualitative decline of the Indian economy.

I would have expected a rambunctious budget, one that could have pulled the economy out of its current stupor. It was instead a whimper.

Where are those solid markers? Core schemes have been undermined. The MGNREGA reduced by 13%, jobs and skill development – allocation reduced by 7%.

Commerce and industry reduced allocation by 4.8%.

To me it seems we were in ICU, now we are being pushed into the ventilator.

Dr Ila Patnaik, Economist: There wasn’t much fiscal space. You couldn’t do much.

There is a bluff element in this (fiscal deficit target)

Off-budget allocations are being done

The real deficit ranges over 5% according to studies

LIC has a huge proportion of non-performing assets. It was asked to buy a huge portion of coal India. Unprecedented.

I would compliment the Finance Minister for showing fiscal discipline. She did not have much headroom.

I do hope like Mr Vajpayee, they create a separate ministry of divestment and put a competent minister in-charge.

I am all for rapid privatization.

We never recovered from demonetization and implementation of GST.

From a business sentiment point of view, the budget has been very positively received by India Inc.

The FM gave a lot of assurance that tax terrorism would be done away with.

The whole aspect of allowing FPIs to invest in corporate banks. They augur very well for investment.

But the budget was meant to look at how to revive consumption.

I don’t think that has been addressed.

The new tax slabs don’t make much of a difference.

Shifting the DDT from the company to the shareholder is not going to go down well.

The budgets needs to be looked at not from the perspective of the stock market.

My perspective is that there is a clear realization that the government alone cannot drive growth.

We will be making many more radical suggestions in the days to come.

Credit flow is a challenge.

Doubling farmers’ income, in nominal terms including inflation, is doable

Tax harassment had to go

What they are doing to LIC is not privatisation but flogging of your asset.

The government is unable to collect taxes, it can’t meet divestment target.

Didn’t hear the word slowdown once. That to me sounds like a denial.

Priyanka Chopra reveals how she held her Grammys outfit together avoiding a wardrobe malfunction : Bollywood News