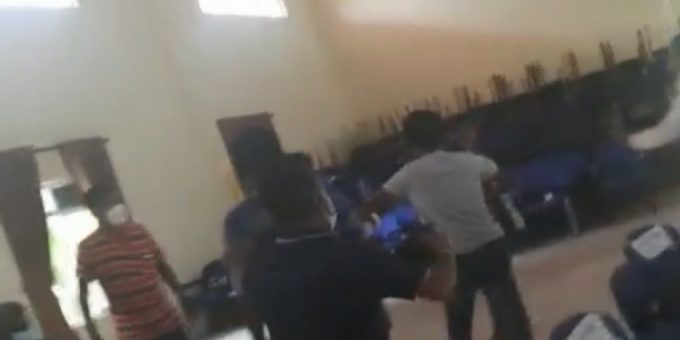 COLOMBO (News 1st); Tensions flared at Pradeshiya Sabhas on Thursday (16) due to issues that arose from tabling budgets for the next year.

A situation also arose at the UNP-controlled Horowpathana Pradeshiya Sabha when the budget was tabled on Thursday (16), amidst allegations that the Chairman had attempted to pass the budget on his wishes.

Many vociferous PS members have opposed the budget, and some have even attempted to attack other members. Moreover, several opposition members were seen smashing glass bottles on the ground in protest.

The President of the Horowpathana Pradeshiya Sabha, Saliya Udayanga Wijerathne speaking to media stated that as they were wrapping up sittings of the Pradeshiya Sabha, members of the Sri Lanka Podujana Peramuna attacked him and caused damages to the property.

Meanwhile, another tense situation arose at the Horowpathana Pradeshiya Sabha on Thursday (16) when the budget for the year 2022 was tabled, when many alleged that the budget was tabled without being discussed.

Ranasinghe Dissanayake, the President of the Hanguranketha Pradeshiya Sabha stated that he is not ready to act according to others wishes, and said that he is simply acting according to the law.

Opposition members had repeatedly requested the Chairman for a vote on the 2022 budget, however, the budget had received only 2 votes in favor, including that of the chairman.

A tense situation arose at another place, when the 2022 budget for the Mawanella Pradeshiya Sabha was tabled on Thursday (16).

Tensions flared as a Tamil copy of the budget had not been tabled at that time, and the Opposition had then requested for a vote on the budget.

Subsequently, the Chairman of the Pradeshiya Sabha and the United National Party members who hold a majority in the local authority had left the premises.