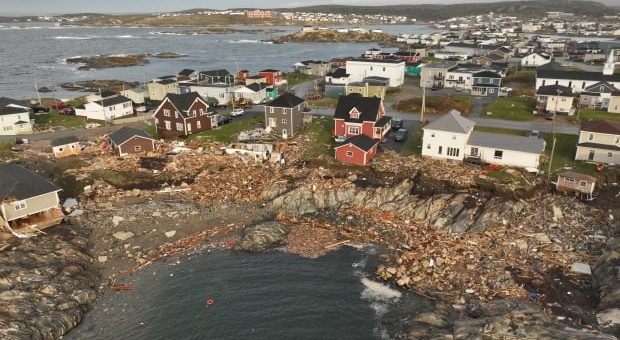 A 73-year-old Port aux Basques woman was killed by a massive wave while preparing to flee her home, according to the RCMP in Newfoundland and Labrador.

Police say the woman was at home with another person, and the two were securing the property on Saturday morning as post-tropical storm Fiona was intensifying.

One person was outside when a large storm surge swept into the house, and carried out everything in the basement.

“When the other individual went in to check on her, she was nowhere to be found,” said Cpl. Jolene Garland, media relations officer for the RCMP in N.L.

A call was made to police, but the storm was too intense for a search to begin. Port aux Basques was hammered by wind and waves, which levelled about 20 houses in the small oceanside town. When conditions settled down, the RCMP was able to get out and search for the woman, along with the Canadian Coast Guard and ground search and rescue teams from Barachois and Stephenville.

The woman’s body was found just before 4 p.m. on Sunday, thanks to the combined effort of multiple teams.

“As the chopper was patrolling up in the air it was actually shifting things around in the water and one of our officers on land spotted what they believed was a body,” Garland said.

The woman’s body has been sent to the chief medical examiner’s office in St. John’s to confirm cause of death.

“It’s a tragic situation but we’re at least thankful she was able to be returned to her loved ones,” Garland said.

“[It’s] never easy to deliver the news that it looks like it’s going to be a recovery instead of a rescue mission, but [when dealing] with the ocean, it’s not everybody we get to bring home to their loved ones.”

While Fiona hammered other parts of Atlantic Canada, Newfoundland and Labrador is the only province with a confirmed loss of life directly related to the storm.

The tragedy has led to an outpouring of condolences, including from the most powerful people in the country.

“My heart breaks for the family and friends of the woman from Port aux Basques who passed away when Hurricane Fiona made landfall,” Prime Minister Justin Trudeau said in a message posted to social media.

“We’re keeping you in our thoughts — and we’ll continue to make sure you, and your fellow Newfoundlanders and Labradorians, have the support you need.”

Premier Andrew Furey also weighed in, calling it “gut-wrenching news,” and sent condolence to the woman’s family and friends.

The RCMP are still urging people not to return to their properties until they can be inspected. Garland said several more properties could be at risk of collapse.

“We don’t want any more devastation than we’ve already had,” she said.

Residents of Port-aux-Basques, N.L., describe the harrowing experience of living through post-tropical storm Fiona — and what they’re witnessing in its aftermath.

Warnings Nitrious oxide use could lead to long-term disability