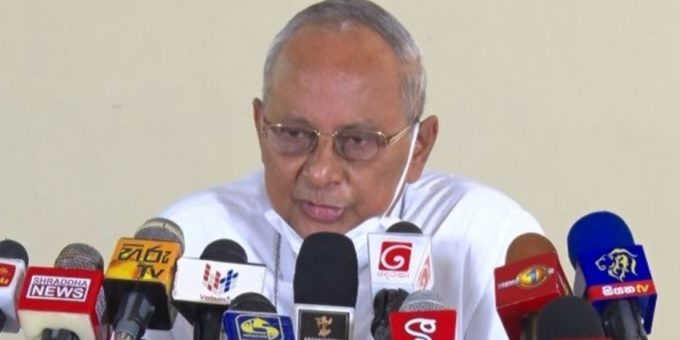 COLOMBO (News 1st); His Holiness Pope Francis has written to the Archbishop of Colombo on the April 21st attacks.

The letter reads:
“This situation makes me very sad. I promise to pray more and I remain ready to do whatever you consider opportune. Tomorrow I will speak with the Secretary of State about it. Please count on me and indicate what would be best to be done from here.”

Meanwhile, An online webinar was held to create awareness among Sri Lankans in Europe on seeking justice for the April 21st attacks.

It was attended by Sri Lankans in Italy, Switzerland, France and Belgium.

Speaking at the event His Eminence Malcolm Cardinal Ranjith said the investigations surrounding the 2019 April 21st Attacks were politicized.

“The President went around saying during his election campaigning saying that he will surely create a secure atmosphere for the people in Sri Lanka and that he will ensure that justice is done according to the recommendation of the commission,” said His Eminence.

“He was elected with a large, consistent majority mostly from the voters who were very keen to ensure that this attack be investigated and justice be done to the people concerned,” he added.

“But unfortunately just 2 days after he received this document (PCoI Report) he called me and told me that he finds its difficult to implement some of the the proposals or recommendations of the commissions and I told him, well he has to be independent and he must allow somebody to instruct somebody to carry out these recommendations as they are made by the commission and he said he will,” added the Cardinal.

“Now it has come to a stage where action is being taken only against a few Muslims who had practically some kind of link with the terror group. All the other recommendations haven’t been implemented. The former president has also been listed for prosecution. At one time they said there is a big brain behind it. Later they said the big brain is somebody and they tried to pass the blame there. So there has been a lot of politicizing,” he further added.

Myanmar coup: 'Everything will be OK' teenage protester mourned
2021-03-04