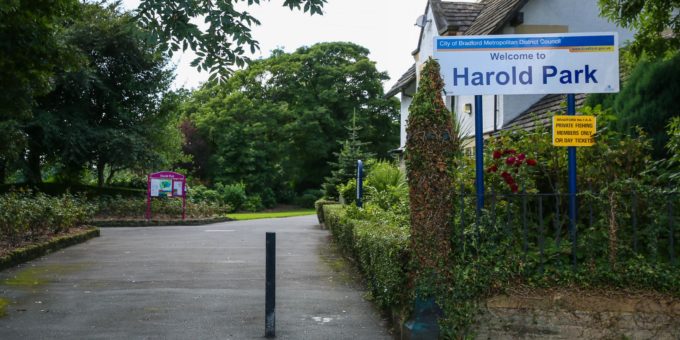 A POPULAR Bradford park was hit by a spate of vandalism over the weekend, including racially offensive graffiti.

News of the damage, which happened at Harold Park, Low Moor, was met with disgust. People are being urged to get in touch with the park’s Friends group, or contact police, if they see anything else.

Posting on Sunday, the group said: “We are extremely saddened to say we have had to report two incidents of vandalism to the police this weekend. Yesterday we reported some particularly nasty graffiti that cannot be tolerated and today we have reported vandalism to the sign in the sensory garden and to some houses from the fairy garden.”

Volunteers worked to remove the graffiti, while some repairs have been made to the damaged fairy houses.

Councillor Angela Tait (Lab, Royds), who is also chair of the Friends of Harold Park group, spoke of her dismay and said it’s rare that such things happen in the park. She alerted the Council’s cleansing team to clean up any remaining signs of the graffiti and said those responsible “are not welcome in our park”.

“It’s not acceptable, it won’t be tolerated. It’s a hate crime,” said Cllr Tait, who branded the vile graffiti as “distressing” and “really upsetting, because of the hate, the message behind that”.

Cllr Tait added: “It’s a different level, to me, that’s not just your regular vandalism.”

Other damage was also discovered, making the situation all the more galling for the group and army of volunteers who dedicate time to the park.

Cllr Tait said: “To happen within 24 hours of each other, it does make it really upsetting for people who visit, for the members that put so much into putting things on for people. We are hoping it’s an isolated incident.”

A West Yorkshire Police spokesperson said: “Police have received reports of criminal damage in Harold Park this weekend, relating to graffiti and damage to ornaments. The incident involving the graffiti has been recorded as a racially-aggravated offence, due to the language used.”

Police are now working to find those responsible and anyone with information is asked to contact the Bradford South Neighbourhood Policing Team on 101, or by using the West Yorkshire Police website. Information can also be reported anonymously to Crimestoppers on 0800 555111 or online.

For all the top news updates from right across the region straight to your inbox, sign up to our newsletter here.

Have you got a story for us? Contact our newsdesk on newsdesk@telegraphandargus.co.uk