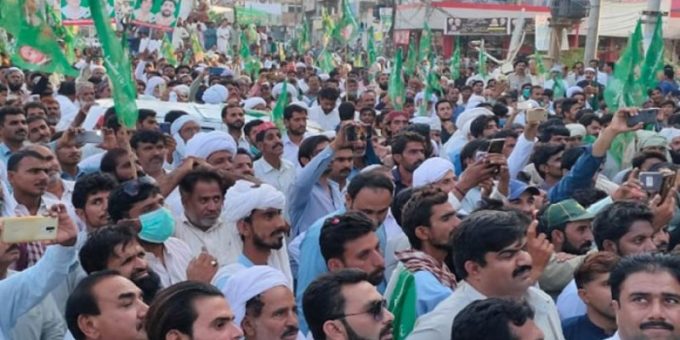 The long march would now arrive in the federal capital on March 28 instead of March 27 and would depart from Lahore on March 26, the party said in a statement.

The decision was taken during a meeting under the chairmanship of Leader of the Opposition in NA and PML-N President Shehbaz Sharif.

The march would be led by PML-N Vice-President Maryam Nawaz Sharif and Leader of the Opposition in Punjab Assembly Hamza Shehbaz.

Shehbaz, during the meeting, instructed the organisers to ensure best possible coordination at all levels so that the long march can be managed smoothly.

The opposition leader said that the long march would fulfil aspirations of the people and the country would be spared from economic catastrophe, rising inflation and unemployment upon its success.

“The long march is a decisive step of the people affected by inflation, incompetence and corruption of the government,” he added.

Meanwhile, the joint opposition has issued a “charter for the people” to mark the Pakistan Day.

The opposition parties, in a statement, said they were committed to provide a “better Pakistan” upon success of no-trust motion against Prime Minister Imran.

“We will make a Pakistan where sanctity of Constitution is paramount… all institutions will follow the elected administration and parliament and only people will have the right to elect and dismiss their representatives,” the statement added.

The electoral reforms, it further said, will be implemented by consensus to ensure free and fair elections, adding that all “undemocratic interferences” will be prohibited in the ‘better Pakistan’.

The joint opposition, it said, was committed to lift all restrictions on media and abolish “black laws”. The opposition also assured that concrete steps would be taken for the recovery of all missing persons and corruption would be curbed by establishing an impartial body for transparent accountability.

The statement further said that Pakistan would be recognised globally as a dignified and independent state via an independent foreign policy.