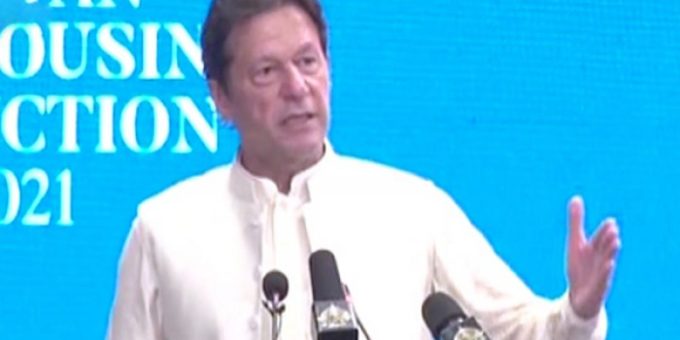 Addressing the launching ceremony in Islamabad, the premier said the construction sector was the biggest provider of job opportunities because it had numerous industries attached to it.

“This is one way of providing employment, wealth creation, increasing revenues to meet expenses and repaying loans. We will repay loans when the economy grows and more than anything, it grows on the basis of construction,” he said.

The prime minister called upon the construction sector to fully try and depend less on imports, saying that “all raw material is available in Pakistan.”

“I assure you that we will fully help you. It is the government’s job to manufacture more things in Pakistan,” he added.

According to Prime Minister Imran, a “construction boom” was coming to the country due to the great demand by the 220 million people for low-cost housing.

He lamented that the common man, daily wager or government servants never had the opportunity in the past to build their homes because of a lack of mortgage-financing options but that obstacle was now removed due to the government’s efforts to pass the foreclosure law.

“Banks will give money to people for mortgage financing and then this population of 220m of ours will become an asset because it will generate demand and then construction and related industries will start running.”

The premier told the event that he had called the chief of the International Monetary Fund to gain concessions for the construction industry during the Covid-19 pandemic.

He also said that over the course of numerous meetings, “we realised … our entire system has evolved in such a manner that it puts obstacles instead of facilitating and encouraging industry and wealth creation.”

When a society begins to decline, the premier said, its bureaucracy too devolves and becomes self-serving instead of encouraging growth and prosperity. “It takes time to change the system,” he added.

Prime Minister Imran said many meetings had been held to remove obstacles for the construction industry and while they hadn’t been eliminated fully, there were more incentives for the industry than before and the government would continue increasing them.

Speaking about problems within the Federal Board of Revenue (FBR), he said the government was “continuously trying to bring reforms” in the body, pointing out that Finance Minister Shaukat Tarin hailed from the private sector and was familiar with its issues.

He said the true potential of Pakistan’s population would be realised when the industry, particularly the export industry, was encouraged.

“It is necessary that we help ourselves, facilitate you and the government creates ease of doing business for you but then you too help the government by paying tax,” he emphasised.

He said until taxes were paid, the country’s wealth wouldn’t increase and the government wouldn’t be able to facilitate the construction sector so “it is a two-way system.”

“We have to help you so your wealth increases. You have to help us through paying tax so we can improve infrastructure and fulfil basic requirements of people.”

The premier said the government would continue to work with the ICCI and resolve its issues.

Diabetes? This Rajma And Chana Chaat Could Be The Yummiest Addition To Your Diet
2020-10-12