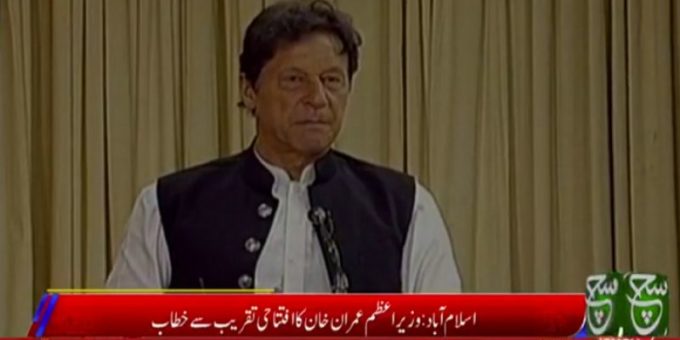 The prime minister, speaking at the inauguration ceremony, said the digitalisation of land records was a “big step forward” in curbing land record tampering.

“The land records should have been computerised earlier […] not digitising them had aided powerful people,” the prime minister said.

PM Imran Khan highlighted that the land-grabbing mafia did not want records to be digitalised as it would have a setback on their motives. “50% cases in courts are of land disputes.”

The premier said land grabbers occupy the homes of overseas Pakistanis, however, this digitalised system will now help keep track of the land’s ownership.

“The land records of Islamabad, Karachi, and Lahore will be digitalised […] and technology will help beat the land-grabbing mafia,” the prime minister said.

The prime minister mentioned that the price of land was surging in the country and it was the government’s responsibility to keep a check on it and safeguard the interests of the people.

He mentioned the government had recovered state land worth Rs300 billion in the last three years — since PTI came into power.

The prime minister highlighted that overseas Pakistanis were the ones most affected by land grabbing as when they come back to the country, their land is seldom occupied by another person.

“It is an ordeal to get the land ownership transferred, people have to pay bribes for it […] but now in six to seven months, you can get it done while sitting at home,” he said.

Overseas Pakistanis will invest in the country once we provide them a conducive atmosphere, he said, adding land occupation will end through the digitalisation project.

“The tree-plantation campaign in the country will also benefit from cadastral mapping […] It will help avert deforestation,” the prime minister added.

The mapping project has been conceived and inspired by the prime minister’s vision to modernize the old “patwar system”, Radio Pakistan reported.

The project will also help overseas Pakistani to verify online information before purchasing land in Islamabad. The new system will also help identify the illicit hinging of state land, encroachment at nullah, and forests.

The economy is still a long way from normal