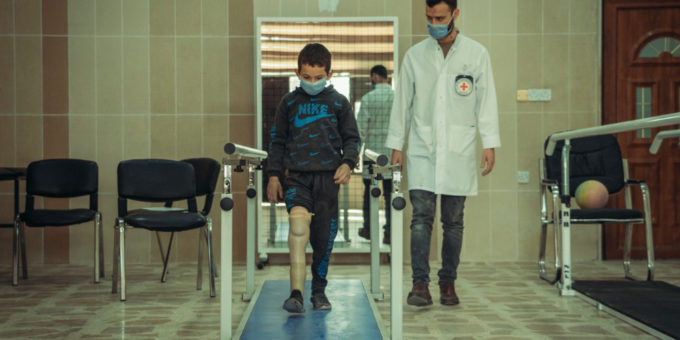 NEW YORK: Although to outside observers the Middle East might appear to be experiencing a period of renewed, active diplomacy, including a host of new peace initiatives, “our teams on the ground see no difference,” according to Fabrizio Carboni, regional director of the International Committee of the Red Cross for Near and Middle East.

During a virtual briefing in New York, he painted a bleak picture of a region that continues to struggle with protracted conflicts, collapsing economies and dire financial predicaments, on top of efforts to battle a COVID-19 pandemic that continues to rage amid vaccine scarcity in many countries. Only 5 percent of Syrians have had their first dose of a vaccine, and 2 percent of Yemenis, for example.

This amid “donor fatigue,” said Carboni, as conflicts proliferate elsewhere in the world, including Afghanistan and Ethiopia, and donor nations divert resources that would previously have gone to help people in the Middle East.

“For the time being, we are $8 million short of what we need for a full slate of humanitarian activities in Israel and the Occupied Palestinian Territories,” Carboni said, by way of an example.

“In Iraq, we are short of $20 million. And even if these countries are not in the top headlines on a daily basis, the families (there) continue to suffer and need massive help.”

Adding to the difficulty of funding humanitarian work in some parts of the region is the fact that “we are moving from true emergency, like distributing food, to another phase — let’s call it ‘early recovery’ — where we need to work on systems to allow people to be autonomous and get back on their feet. And this is a more complex activity to finance and it costs a lot because of the size of the destruction.”

The destruction caused by a decade of conflict in Syria is reminiscent of that caused in Europe during the Second World War, according to Carboni.

“Every time I go back to Syria I always have the feeling that the conflict ended the day before,” he said. “There is this permanent state of ‘Year Zero’ and it’s really heartbreaking.

“And the financial crisis hitting Syria today is an additional layer of vulnerability and complexity, and it is hitting very, very hard the average Syrian.”

Warning that the freezing winter temperatures are making conditions even harsher for displaced Syrians, both internally and as refugees, Carboni in particular highlighted the plight of children as the worst-affected by the crisis. The situation in northeast Syria represents “one of the largest child-protection crises in the world today,” he said.

At the Al-Hol camp, for example, which the official recently visited, he said the vast majority of residents are children under the age of 12. Many of them were separated from their families during transfers to other camps. These children need to be reunited with their families, repatriated alongside them, or have alternative care provided for them, Carboni added.

The packed Al-Hol camp is home to more than 60,000 women and children, many of them the wives and children of defeated Daesh fighters. The majority of states where they originally came from, including the UK, refuse to repatriate them.

Carboni called for “collective action to have a long-term view for those populations who are still stranded in northeast Syria in a legal limbo.” He encouraged all states to repatriate their citizens and “do it lawfully, according to standards and principles, including support to returning children and their families.”

He added: “Family unity should be the norm during repatriation. Keeping families together is usually in the child’s best interest and it’s what international law requires, unless otherwise justified by a rigorous assessment.”

Referring to the political process, Carboni lamented the lack of will to make sacrifices for the sake of peace.

“Peace agreements are about compromise,” he said. “My fear around Syria, but also generally speaking, is that parties to the conflict try to find a painless solution.

“Oftentimes, there is a political price to pay when you decide to make peace. You always need a form of political courage; giving in on something. What we see in Syria (is) there is no will to make this compromise. That’s why the situation is frozen, rotting, and the ones who are paying the price are Syrians.”

In Yemen, where “all basic services are down,” seven years of conflict have come on top of other chronic challenges facing the nation that have nothing to do with war, such as climate change and an education crisis, Carboni said.

In the absence of basic healthcare, with 24 million people in need of assistance and three-quarters of the population living in near-famine conditions, what is needed is for “states with influence to help reach an agreement to shut down this conflict and to allow the people of Yemen to focus on rehabilitating their country and the existential challenges it is facing,” he added.

Turning to the COVID-19 crisis, Carboni said that while the pandemic is the major threat facing the West, it is just one additional layer of vulnerability in places such as Syria, Iraq and Lebanon, where people are trying to cope simultaneously with multiple crises.

Preventive measures such as social distancing become an absurd demand at overcrowded refugee camps and shelters, he pointed out. Sheltering at home is out of the question for Yemenis, who have to venture out every day to find food for their families. Frequently washing hands might sound a simple precaution for people in Western nations, but for those in Tikrit, Mosul, Hodeida or Aden, water is often not so readily available, he said.

Reaching vulnerable populations with vaccines remains an “an absolute necessity” in efforts to end the global pandemic, Carboni added.

The Policy Debate at the Heart of the Biden-Manchin Standoff

After Salman Khan announces Bajrangi Bhaijaan 2, Kabir Khan says there is nothing to talk about : Bollywood News