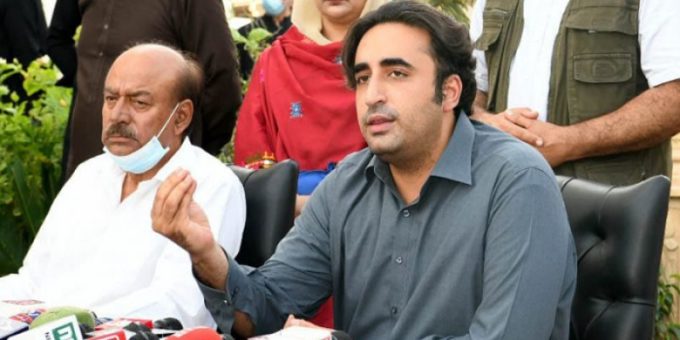 PPP Chairperson Bilawal Bhutto-Zardari on Monday took a jibe at the opposition alliance Pakistan Democratic Movement’s (PDM) rally in Karachi a day earlier, saying “maybe the rally would have been more effective if they (PDM) gave women permission to participate.”

Addressing a press conference in Sukkur, he said he could not comment on whether the PDM rally — the alliance’s first power show after a months-long lull — was “successful”, adding that the PPP believed all democratic parties should play their role.

However, it would have been “more effective” if the PDM allowed women to participate in the rally, he said.

“This is not Afghanistan. This is Karachi, capital of Sindh,” he remarked.

He questioned how a country and a city could be run when “even a home cannot be run without a woman”, recalling that Pakistan was the first Muslim country to appoint a female prime minister.

No society can progress until men and women are equal participants in economy and politics, the PPP chairperson said. “Maybe this was a reason that Karachi rejected them (PDM) and that [an] impression could not be built as in the past.”

However, there was “more time” and the PDM would hold more events, he said. “Our best wishes are with them — that the government is harmed from their movement instead of benefitted because till now, we think the government is benefitting from the PDM’s way of [doing] politics.”

He shared that he had asked Sindh Chief Minister Murad Ali Shah to talk to PDM president and Jamiat Ulema-i-Islam-Fazl (JUI-F) chief Maulana Fazlur Rehman and PML-N president Shehbaz Sharif and inform them that “we are present if they need anything.”

Bilawal said the PPP had “showed a way to the whole country to get rid of Prime Minister Imran Khan” when it managed to make former prime minister Yousuf Raza Gilani win in the Senate polls in March instead of PTI’s Abdul Hafeez Shaikh.

He said that if the other opposition parties agreed to “first attack Punjab and then go the national level, then this government will go home”.

If the opposition was serious, then it could pull off “such a big feat, the example of which you won’t find in the democratic system” similar to how it had “defeated the prime minister from his own electoral college” during the Senate polls, he added.

Talking about mass resignations — the issue which led to PPP’s separation from the alliance — the PPP chairperson said the PDM parliamentarians should resign “on principle since we are not together [and] that was their problem”.

The votes of PDM members who were a part of the National Assembly were being “wasted”, he claimed.

Bilawal invited the opposition to support the PPP, stressing that it could “not only give a tough time to the government but also remove it”.

Responding to a question, the PPP chairperson said it was a “misunderstanding” that the Sindh government did not want to hold local government elections.

He claimed that a “fake census was conducted to snatch the rights and resources from the province and people”, citing it as the reason for the delay in holding elections for local bodies.

He noted that the Sindh government had written twice, asking for a joint sitting of parliament to be held on the issue of the 2017 census, but the demand was not accepted.

“As soon as this issue concludes, we will be first in carrying out local bodies elections and also win them.”

The PPP “respected democracy and national mandate” which is why local bodies were able to complete their five-year term unlike in Punjab and Khyber Pakhtunkhwa, he added.

Petrol price in Pakistan expected to fall from Sept 1