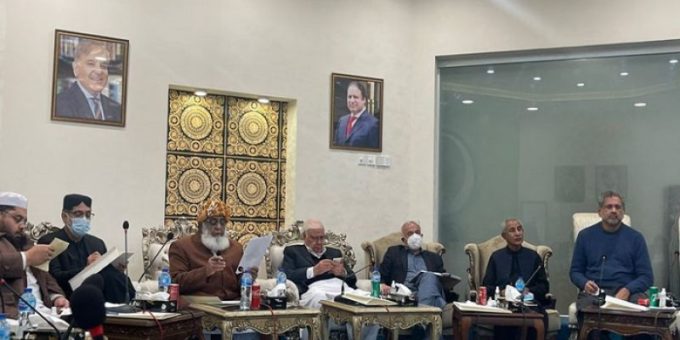 Despite the government’s requests, Pakistan Democratic Movement (PDM) chief Maulana Fazlur Rehman said on Tuesday that the opposition alliance would be moving ahead with its plan to hold an “anti-inflation” long march to Islamabad on Pakistan Day (March 23).

He expressed these views while speaking to the media in Islamabad after a meeting of the heads of the PDM’s component parties.

Asked how the PDM would enter the federal capital on March 23 as security arrangements would be tight due to the military parade and a session of the Organisation of Islamic Organisation (OIC), he replied: “The PDM will enter. They [the government] knew that we were staging a long march on that date. Under what conspiracy did they make such recommendations?”

He said that as far as the military parade was concerned, it would begin early morning and wrap up by Zuhr prayers. “We will come after Zuhr prayers.”

The PDM had already given a call for holding a long march to Islamabad against the price hike on March 23.

Last week, Interior Minister Sheikh Rashid Ahmed had urged the opposition alliance to change the date as the nation would be celebrating Pakistan Day while foreign guests would also be present in the country for the OIC summit.

He had suggested that the PDM reschedule its march to hold it four days before or after March 23. The minister had also indirectly conveyed to the PDM that there was a chance that the government might seal Islamabad due to the parade and other activities.

Maulana lashes out at govt

During his press conference, the Maulana also touched on all the things discussed during today’s meeting and came down hard on the government for its alleged failure in effectively tackling the country’s issues.

He said that the PDM had rejected the recently passed Finance (Supplementary) Bill, generally known as the “mini-budget”, and called for it to be withdrawn.

Commenting on the State Bank of Pakistan (SBP) Amendment Bill, which was also recently passed by the National Assembly, he lamented the fact that the country’s institutions were being handed over to international financial institutions.

He said that the opposition parties valued the country’s freedom and would not allow the government to trade it.

He said that inflation had broken the backs of the country’s citizens and trapped the nation in a place where there was no possibility of escape. Rehman claimed that the government was not cognisant of the people’s screams for help.

“A ruler who can’t fulfil the responsibility of the common man or the economy has no right to remain in power.”

Commenting on the Transparency International (TI) report released earlier today, the PDM chief said that the government had labelled all opposition leaders as corrupt and called them thieves. “But the TI report has laid bare their artificial honesty.”

He lamented the fact that over the span of a few years, the country’s ranking on the TI corruption index had gone from 114 to 170.

He went on to say that the current PTI government had proven to be the most incompetent and unsuccessful in the country’s history. “Despite this, they are trying to gear up for the next elections and are planning to do rigging using electronic voting machines (EVMs).”

He added that Prime Minister Imran Khan had been proven a criminal in the foreign funding case and had hidden around 26 accounts. He called on the election commission to conduct daily hearings in the case, to disqualify the prime minister and to ban the PTI.

“Parties formed by external powers are not the true representatives of the people.”

He also talked about the tragedy in Murree in which 22 people died after their cars were stranded in a snowstorm in the resort town earlier this month.

He said that all countries take measures to ensure roads are clear and to help tourists when there is snowfall. “But the administration [in Murree] was asleep.”

He added that the Punjab government had removed officials for the role they played in the incident when the premier and the chief minister should have resigned.