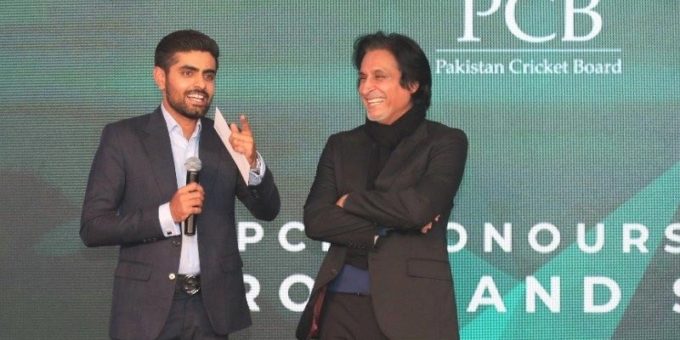 The details of the conversations that took place in the ceremony organised, yesterday, by the Pakistan Cricket Board (PCB) to “honour its heroes and stars” have been revealed.

Speaking on
this occasion, PCB Chairman Ramiz Raja showered praise on the entire team due
to their impressive performance last year.

“I’m proud
of the entire team and believe that Pakistan can become the number one team in
the world if they continue such performance,” said Raja.

The former
Pakistan captain, Raja, also threw his weight behind the team by telling them
that “they don’t have to worry about anything as long as he is here”.

Raja also
questioned Pakistan skipper Babar Azam about his experience of leading the side
in the last T20 World Cup.

“The entire
team supported me like a family which is why I never felt the pressure of leading
the side in a major event like the T20 World Cup,” Azam responded.

“Shaheen you
are a superstar and I hope that you will continue to play a major role in
Pakistan’s victories,” said Raja.

Raja also
gave a cash prize, worth PKR 1.5 million, to every player who represented
Pakistan in 2021.

“This cash prize holds little value when compared with your performance but I still wanted to reward you for your hard work on the field,” said Raja while hoping that the national team will continue to perform well in future series as well as the Pakistan Super League.

BJP’s Yogi Adityanath To Fight UP Election From Gorakhpur