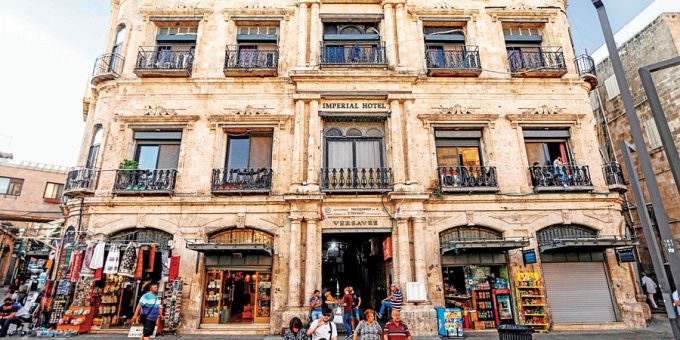 AMMAN: Palestinian and Jordanian officials have rejected a decision by the Supreme Court of Israel approving a controversial sale of three strategic locations inside Jaffa Gate in Jerusalem to a radical Jewish group.

Israel’s top court accepted the 2004 sale of property by the Greek Orthodox Church to a pro-settlement organization in mainly Palestinian areas of annexed East Jerusalem.

In its ruling on Monday, the court rejected the church’s appeal against a district court’s 2017 approval of the same deal on grounds of corruption.

Three companies linked to a group named Ateret Cohanim secured the long-term lease of three buildings owned by the church — the Petra Hostel and the New Imperial Hotel, both located by the Jaffa Gate, and a residential building in the Muslim Quarter.

The deal made Ateret Cohanim the owner of the majority of the properties between the Jaffa Gate and Arab Market areas.

The church asserted that the deal was conducted illegally, and said in 2017, after Israel’s Jerusalem District Court ruled against it, that the court had “disregarded the Patriarchate’s clear and concrete legal evidence proving bad faith, bribery and conspiracy.”

In a statement on Tuesday, Palestinian Greek Orthodox Archbishop Atallah Hanna described the Supreme Court’s decision as “illegal and illegitimate,” adding “the seizure of the historic Jaffa Gate properties by extremist settler organizations is a new catastrophe for the Christians in this holy city.”

Jordan was right to decline an invitation to go to Israeli courts in order to overturn the enforced closure of Bab Al-Rahmah two months ago.

Wasfi Kailani, Director, Hashemite Fund for the Restoration of Al-Aqsa Mosque and the Dome of the Rock

The Higher Presidential Council for Church Affairs issued a statement noting its rejection of the decisions of the Israeli courts, which it called “instruments in the hands of the occupiers” aimed at perpetuating the occupation and empowering settlers. The statement called for the protection of existing tenants and for a “popular movement to face up to the policies aimed at removing Palestinians from their city.”

Hanna Issa, the secretary-general of the Islamic-Christian Commission in Support of Jerusalem and Holy Sites, told Arab News that the Israeli court decisions were in violation of international humanitarian law, which considers East Jerusalem to be occupied territories.

“The Israeli high court has approved the decision of the central court, despite documented proof of forgeries and bribes that were used to reach the sale agreement. This is clearly an attempt to obliterate the Christian and Muslim Arab character of Jerusalem. Palestinians living in these buildings are protected tenants according to Jordanian law, which is applicable to Palestinians in Jerusalem.”

Wasfi Kailani, director of the Hashemite Fund for the Restoration of Al-Aqsa Mosque and the Dome of the Rock, told Arab News that the Greek Orthodox Patriarchate is targeted more than other churches because it is the largest landowner in Palestine.

“What happened with the Greek Orthodox Church shows that the Islamic Awqaf Council and Jordanian government were right to decline an invitation to go to Israeli courts in order to overturn the enforced closure of Bab Al-Rahmah two months ago.

“All Israeli policies aimed at annexation of occupied Palestinian and other Arab territories, including Jerusalem, are in violation of international law; these practices are null and void and must be rescinded.”

Salman Khan: I get scared when critics like my film

The new coronavirus: Symptoms, prevention, and what to do if you think you’re infected
2020-01-24