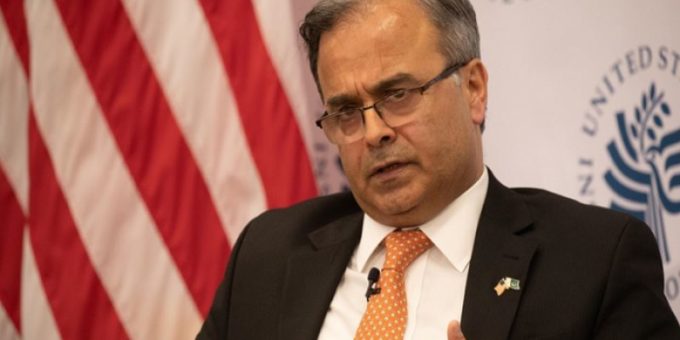 Pakistan is monitoring the ability of the new Taliban government in Afghanistan to deliver on commitments and promises to uphold human rights that they have made to the international community before extending recognition to it, Pakistan’s Ambassador to the United States Asad Majeed Khan has said.

“Whether the Taliban actually abide by those (commitments) is their call,” the Pakistani envoy said in an interview with The Washington Diplomat.

“But we have basically laid out our expectations, which is that we want the rights of everyone to be respected,” he said when asked under what conditions Pakistan would recognise the Taliban government.

“We want that Afghan territory not be used against any other country, including Pakistan. We want human rights and women’s rights to be preserved.”

At the same time, Ambassador Khan said Pakistan believed that “instead of indulging in give-and-take on these issues, right now what’s really important is to avert a humanitarian crisis.”

What was really important at the moment was to “basically not let things fall apart”, he said, adding “clearly, there is a new reality, which is a government under the Taliban.”

“The international community has to make a choice: between engaging — and that doesn’t necessarily mean recognition — and abandonment.”

Replying to a question about Pakistan-US ties, he said since 9/11, Pakistan has essentially been seen through the prism of Afghanistan.

“I can tell you that today, we are together on the same side in terms of our interests and expectations in Afghanistan. The US wants to see the conflict end; that’s also what we want. And we would like to see that the gains Afghanistan has made over the last few decades are preserved.”

Asked about the impression in the US that Pakistan supported extremist groups, Ambassador Khan said the facts needed to be looked at more closely.

“Pakistan has been a close partner and ally in decimating Al Qaeda, and in bringing about the peace negotiations (on Afghanistan),” he said, asserting that it was unfortunate that Pakistan was associated with a lot of negative news.

About India-Pakistan ties, he said, “Unfortunately, we have a government in India which is fundamentalist and ideological, which believes in unilateralism, and which has regrettably rebuffed all our peaceful overtures.”

Prime Minister Imran Khan had publicly extended the hand of friendship to Indian Prime Minister Narendra Modi, he said, noting that the latter chose to indulge in military adventurism.

“The situation in [occupied] Kashmir continues to be very bad. Pakistan wants to resolve all its disputes through engagement and dialogue. Our two countries have no other options but peace.“

Last month, Pakistan had decided that it would not recognise the Taliban government unilaterally but with the consent of regional and international powers.

“Pakistan would take a decision about recognising Taliban government in Afghanistan in consultation with regional and international powers, especially China, Turkey and the United States of America,” Minister for Information and Broadcasting Fawad Chaudhry had said after a meeting of the federal cabinet.

Pakistan remained committed to an inclusive political settlement representative of all Afghan ethnic groups, which was the way forward, he added.

In its first official comment on the government announced by the Taliban earlier this month, Pakistan had expressed the hope that the new political dispensation would work for peace and security in Afghanistan and address its people’s humanitarian needs.

Know Its History And Significance

Outcry As 1,400 Dolphins Slaughtered In A Day In Faroe Islands Of Denmark

Kourtney Kardashian and Younes Bendjima: Getting Back Together?
2019-04-21