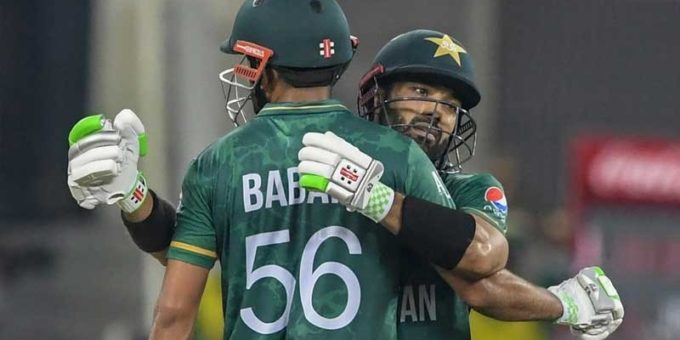 Pakistan beat India by 10 wickets to break their 12-match losing streak against their arch-rivals at World Cups.

“The pressure on us wasn’t that much — we weren’t thinking of the record against India at all,” Babar said after the match.

“This is just the start, we have confidence to build on now. It will remain match by match for us.”

Left-arm pacer Shaheen Shah Afridi shined with the ball for Pakistan, recording figures of 3-31 in his four overs.

He took the crucial wickets of India openers Rohit Sharma and KL Rahul and skipper Virat Kohli, who was India’s best batsman, scoring 57 off 49.

“We executed our plans well and the early wickets were very helpful. Shaheen’s wickets gave us a lot of confidence and the spinners dominated as well,” said Babar.

Fast-bowler Haris Rauf and spinner Shadab Khan played an important role in restricting India to a total of 152 after Babar won the toss and opted to field first.

Haris conceded only 25 runs while Shadab gave away just 22 runs in their four overs. Both took a wicket each.

“This is the first time we’ve beaten India and I feel proud,” Shaheen said after the match. “I knew it would be good for us if I got early wickets and that worked out.”

Indian captain Kohli said Pakistan outplayed his team, which failed to live up to the expectations and was poor with execution.

“We did not execute the things that we wanted to but credit is certainly due, they outplayed us today,” he said. “When you lose three early it’s very difficult to come back, especially when you know the dew is coming.

“Some quality bowling from Pakistan didn’t let us get off the blocks. [Team] we’re certainly not a team that presses the panic button, it’s the start of the tournament, not the end,” he said.

Pakistan play their next Super 12 match against New Zealand on Tuesday, before taking on Afghanistan on Friday.

They will also play minnows Scotland and Namibia later in the stage.

Mohammad Rizwan hits a cracking shot! Pulls it towards midwicket to reach his 50!

Babar hits two fours again as Ravindra Jadeja concedes 11 in the over. Pakistan are well on top!

Babar hits two sixes in the over, reaches his fifty and the pair reaches their 100-run partnership

Fifty for Babar Azam! He hits two sixes to reach another milestone!

Pakistan continue to march on

Babar and Rizwan are in total command right now, taking Pakistan closer to what can be a historic victory

Nine runs for Pakistan in Chakrvarthy’s over, thanks to a four by Babar

A six for Babar, adds another 10 runs to Pakistan’s total. The openers are one roll.

Get a helicopter 🚁 to get this ball. Babar Azam the beauty 🚀🚀🚀🚀

Ravindra Jadeja concedes only three in his first over

A great over for Pakistan, a four apiece for openers Babar and Rizwan they look to consolidate the partnership.

Varun Chakravarthy bowls a very good over, concedes only two.

Jasprit Bumrah concedes only three in his first over.

Babar plays a classic backfoot cover drive for four against Mohammad Shami as Pakistan score eight more in the over.

A four and six for Mohammad Rizwan in the first over bowled by Bhuwaneshwar Kumar.

152 to win Pakistan. Not an impregnable but a befitting total. The lowest defending at Dubai in 2021 is 156. India has lost 8 matches out of 8 where they were defending 160 or less. Come on boys. We know it isn’t going to be easy. 💕

OUT! Haris Rauf’s off-cutter deceives Pandya, who plays it high up in the air, Babar takes a good catch.

Haris Rauf bowls a great over. Only four singles in this one!

Kohli is finally opening his arms, hit two fours in Hassan Ali’s over.

Only four runs in the over. Shadab Khan ends an extraordinary spell, records figures of 1-22 in four overs.

Haris Rauf’s last ball lets him down, a bit off the line and guided for four by Kohli down the leg side.

Successful over for Pakistan. Three runs conceded, one more wicket in the bag.

OUT! Pant plays Shadab straight up in the air, the bowler goes for the catch himself and takes a good one! Breakthrough for Pakistan, the partnership is broken.

Shaddy! ❤️ Much needed break through for 🇵🇰 Come on Boys! #PakVsInd

Pant takes charge for India, hit two sixes in the over as Hassan Ali leaks 15 runs. Fifty partnership comes up for Pant and Kohli.

Haris Rauf bowls his first over and concedes on six runs, including one wide.

India are gradually trying to find their pace.

Good over for India, who now look like starting to recover from early losses. Shadab with some poor deliveries.

Only three runs come in Mohammad Hafeez’s first over. Pakistan went for their first review in the innings after wicket-keeper Rizwan thought Rishab Pant had edged the ball in an attempt to play a reverse sweep. It was turned down.

Good first over by Shadab Khan.

Great Catch that by @iMRizwanPak!#PakVsInd

Another successful over by Pakistan. Hassan Ali gets a wicket, but Kohli hits a four on the last ball as he tries to rescue his team.

Suryakumar Yadav depart! Hassan Ali strikes! What a catch by Mohammad Rizwan behind the wickets!

Shaheen concedes two, dot, dot, dot, before Indian skipper Kohli heaves one over long-on for six! Shaheen comes back with a good yorker to end the over.

Been a while since I saw a white ball swing that much….

Imad concedes a four in the over!

OUT! Afridi strikes again! The left-armer has castled KL Rahul. The stumps, the bails are everywhere! What a start for Pakistan!

OUT! #ShaheenAfridi is on fire as he bowled KL Rahul who departs after scoring just three

Imad Wasim with his left-arm spin, contains India to just five runs for the over.

OUT! Huge, huge breakthrough for Pakistan! Rohit Sharma is gone! Shaheen Afridi with an inswinging yorker, that the right-hander fails to deal with.

This is India’s line up for today’s game

Pakistan have won the toss and decided to ball first. Babar said his team will looking to take early wickets and put some pressure on India.

He expects the dew factor to come into play later and that’s another reason he chose bowl first. The Pakistan skipper said he was confident in their preparation.

Indian captain Kohli said he would have preferred to bowl first as well but has also expressed confidence in his team balance and their capability handle this.

He expected his his team is to stay focused and professional despite the atmosphere around this game. “Use it as a motivation but don’t get overawed,” he said.

While Virat Kohli’s India boast a 100% record over Babar Azam’s Pakistan in 12 matches across their T20 and 50-over World Cup history, the latter will step in the field with 10 wins in 10 matches in the United Arab Emirates.

As the Pakistan squad gathered for breakfast at their hotel in Dubai on the eve of the match, skipper Babar Azam had something to say.

“Relax,” he told the boys, who are carrying the weight of Pakistan’s forgettable history against India at World Cups.

Babar, who is also expected to be the talisman again for Pakistan, urged his team that it needed to hold the nerve

It’s time to show the world what we are capable of!

T20 World Cup, IND vs PAK: Hardik Pandya Taken For Scan After Being Hit On Shoulder In Match Against Pakistan

Grief and anger over death on Alec Baldwin movie

On UN Day, Pakistan calls for implementation of UNSC resolutions on Kashmir
2021-10-24