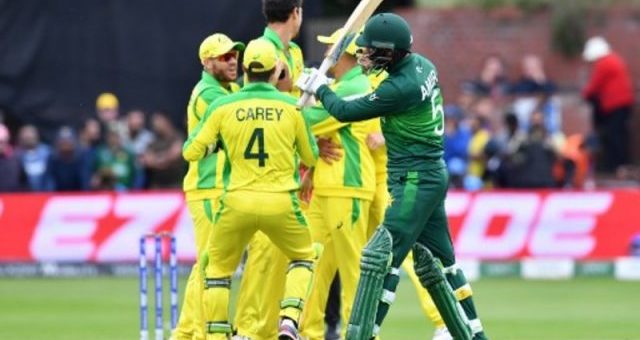 Pakistan’s Mohammad Amir walks back to the pavilion after his dismissal during the 2019 Cricket World Cup group stage match between Australia and Pakistan at The County Ground in Taunton, southwest England, on June 12, 2019. Photo: AFP

But perhaps the most fascinating thing about Pakistan cricket is its ability to delude the fans.

Pakistan have chased down targets of over 300 just six times in their history. The highest target they have ever chased down against Australia is 274, when they won by one run with one ball to spare way back in 1987. That was so long ago that 11 of the 15 players in the Pakistan squad hadn’t been born then and skipper Sarfaraz Ahmed was just a few months old.

Australia have won 26 times when they have scored 250 or more against Pakistan, losing on just four occasions.

Imam-ul-Haq has an average of over 62 when Pakistan are batting second and yet Pakistan have chased down scores in excess of 250 only twice since he has been in the team: 258 against Afghanistan and 267 against South Africa.

Australia had scored 146 by the 22nd over. It was reasonable to assume that Australia will score more than 300 and it was reasonable to assume that Pakistan will not be able to chase it down. A team is not unpredictable if the result can be predicted before a quarter of the match is played. Neither history nor form or personnel suggested that Pakistan would ever be able to chase it down and that is what happened. That is not a sign of an unpredictable and mercurial side, it is the sign of a side that is just simply not good enough.

Cognitive dissonance states that people will often stay true to their deep-seated beliefs even in the face of overwhelming evidence against it and the more contradictory evidence they find, the more likely they are to double down on their original stance.

Pakistani fans continue to insist that their team not only had a chance of winning against Australia but that they threw the game away after being in a commanding position during the chase.

None of them seem to realise that Pakistan are eighth in the World Cup table because that is where they deserve to be.

Imagine how the Australians must feel when they hear a Pakistan fan arguing that their team can win against them because they won in 1992—Australia have won five of the seven World Cups since and were knocked out by the eventual winners in the other two.

The win against England may have been the biggest upset of the tournament so far. It’s foolish to think of it as anything other than that and it’s foolish to let that freak result mask the shortcomings of the players and the management.

Chief selector Inzamam-ul-Haq opted to drop Pakistan’s best pacer in Usman Shinwari, someone who could have been deadly against Australia due to his pace and penchant for pitching the ball up. Pakistan’s fielding is certainly one of the worst in the tournament and may arguably be the very worst of the lot.

The management continues to think that cricket hasn’t changed. The only two batsmen in the entire squad who can score at better than run-a-ball with ease are Fakhar Zaman and Asif Ali, and neither of them will make it into any of the better teams on current form.

Shoaib Malik continues to be woeful and Hassan Ali has lost his wicket-taking ability somewhere along the way in the last two years.

Until Pakistan continue to reward openers like Imam with a spot in the side despite a strike-rate of under 80, until Pakistan don’t realise that big-hitting batsmen are worth their weight in gold in limited overs cricket, until Pakistan don’t make the big calls and stop playing players on reputation alone and until Pakistan improve their fielding, they cannot compete against the giants—let alone defeat them.

The bitter reality is that Pakistan are in England to only make up the numbers, with an upset thrown in there for good measure. They are closer to Afghanistan and Bangladesh than they are to India, Australia, and England. The sooner they realise that, the sooner they can address the issues that have caused this downfall.

Reducing the digital divide is vital, so is producing responsible citizens
2020-05-18