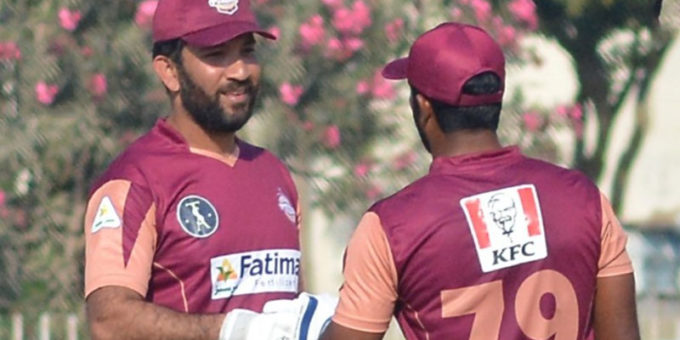 Southern Punjab along with hosts Sindh and Central Punjab registered victories in their respective Pakistan Cup 2021 matches in Karachi on Saturday.

Taking guard, KP made 316-9. Khalid Usman remained not out at 91 while Mohammad Haris scored 68. Adil Amin scored 34, and Israrullah and Iftikhar Ahmed chipped in with 32 runs each.

In reply, Hussain Talat’s side put on a clinical batting display as they completed the run chase in 40.3 overs. Talat, Mukhtar Ahmed and Sohaib Maqsood scored 100, 101 and 108, respectively. Imran Khan and Asif Afridi took a wicket each for KP.

Batting first, the visitors were dismissed for just 186 in 44.2 overs. Asif Ali scored 66 and Sohail Tanvir chipped in with his 49. Mir Hamza and Danish Aziz took three wickets each for the hosts.

In reply, Sharjeel Khan’s century anchored the side to victory in 28.1 overs. He scored 108 while his opening partner Khurram Manzoor struck 52.

Central Punjab triumphed over Balochistan by four wickets at the National Bank of Pakistan Sports Complex.

Batting first, Imran Farhat’s side were dismissed for 213 in 48 overs. Kashif Bhatti top-scored with 59 while Jalat Khan made 55.

Usman Qadir was the pick of the Punjab side bowlers with his four-fer.

Saad Nasim’s side completed the run chase in 46 overs as Qasim Akram struck an unbeaten 60. Tayyab Tahir and Rizwan Hussain scored 47 and 31, respectively.

Adani, Oberoi, Eight Others In Fray For RFP Stage