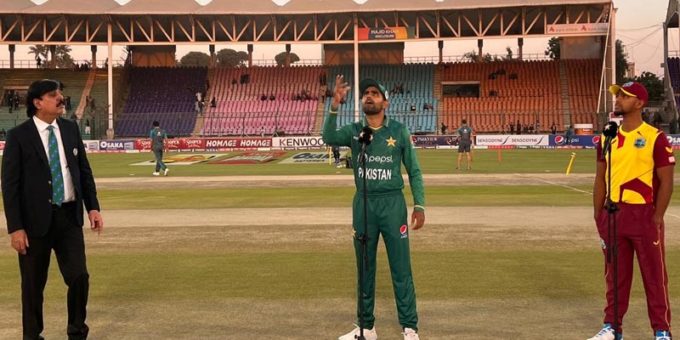 Shadab Khan starred as Pakistan defeated West
Indies in the second T20I to clinch the three-match series on Tuesday.

Chasing
173-run target at the National Stadium Karachi, the visitors went off to a
shaky start with opener Shai Hope (one) and Shamarh Brooks (10) walked back to
the dugout with just 31 runs on the scoreboard.

Opener Brandon
King and captain Nicholas Pooran fought well to bring West Indies back in the
game with a 54-run stand for the third wicket.

At a score
of 85, Pooran lost his wicket thanks to an outstanding catch from Haris Rauf.
He scored run a ball 26.

Brandon
King’s long resistance came to an end courtesy of Haris Rauf. King scored a brilliant
67 off 43 balls with the help of six boundaries and three maximums.

Romario
Shepherd played a superb hand of 35 off 19 balls but he failed to get the team
over the winning line. They were bowled out for 163 in their allotted 20 overs.

Shaheen
Shah Afridi was the star of the show with the bowl as he claimed figures of
three for 26 in his four-over spell.

Mohammad
Nawaz and Mohammad Wasin Jr shared two wickets each for the winning side.

Earlier Shadab
Khan’s 28-run cameo guided Pakistan to a fighting total of 172.  After opting to bat, Captain Babar Azam once
again failed to make a valuable contribution, as he was run out after scoring
just seven.

Fakhar
Zaman too followed Babar’s footsteps as he walked back to the dugout after
scoring just 10.

Once again
it was Haider Ali and Mohammad Rizwan, who recused Pakistan out of trouble. The
duo departed back to the pavilion after scoring 32 and 38 respectively.

Iftikhar
Ahmed smashed 32 off 19 deliveries to get the momentum back for the home side.

Later Shadab
Khan smashed three sixes and a boundary to help the team reach 172-8 in their allotted
20 overs.

For West
Indies, Odean Smith was the star of the show with the ball as he claimed two wickets
for 24 runs in his three over-spell.

He was well
supported by Akeal Hosein, who bowled an economical spell, where he bagged a
wicket just conceding 16 runs.

Haider Ali and Mohammad Rizwan notched up 105 off 63 balls for the third wicket partnership, yesterday.

Can they repeat their first T20I heroics?

Babar Azam is run out after scoring 7 runs

Toss update: Pakistan opt to bat against West Indies in the second T20I 🏏