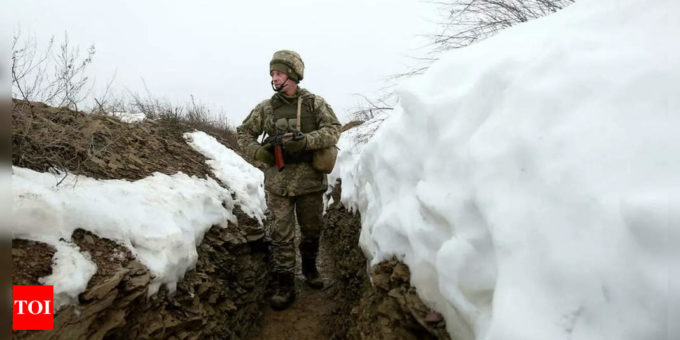 VIENNA: The permanent council of the world’s largest security body will meet in Vienna on Thursday, hoping to push Russia, the United States and its European allies towards dialogue to defuse the mounting crisis on Ukraine’s border.
The West has accused Moscow of massing tanks, artillery and about 100,000 soldiers on Ukraine’s war-torn eastern border in recent weeks, in what NATO says is preparation for an invasion.
But Moscow insists the military deployment is a response to what it sees as the growing presence of NATO in its sphere of influence, where it fiercely opposes the expansion of the Atlantic alliance.
Moscow and Washington have already underlined their “fundamental” differences on European security during tense talks in Geneva and Brussels this week.
And the United States has admitted no breakthrough is expected at Thursday’s meeting of the Organization for Security and Co-operation in Europe (OSCE) in Vienna.
“I don’t think there will be any concrete results this week. Our main goal is, in principle, to establish a dialogue,” said Michael Carpenter, US ambassador to the OSCE.
“Yes, our positions are polar, but this does not mean that there are no elements and areas on which we cannot agree,” he told independent Russian TV channel Dozhd.
The challenge, he said, will be to “determine in what forms it is generally possible to deepen the dialogue on this issue in the next few months or even a year.”
– East meets West – The OSCE, a multilateral forum for East-West discussions during the Cold War, is uniquely suited to walk this complex diplomatic tightrope.
Thursday will be its first meeting of the year, attended by all 57 member states.
After the morning presentation of the year’s priorities by the new Polish presidency, Secretary General Helga Schmitt will hold a press conference at 12:30 pm (1130 GMT).
Talks are complicated by the unclear situation on the ground in rebel-held eastern Ukraine, where the OSCE has since 2014 been charged with ensuring peace accords are respected.
That has failed to end fighting in the region, however, with conditions degrading for OSCE observers in areas controlled by pro-Russian separatists, a situation the US ambassador called “extremely worrying”.
“The monitoring missions have not yet recorded anything anomalous”, said Carpenter, while admitting that on the border “we cannot possibly know what is actually happening”.
NATO chief Jens Stoltenberg also expressed his concern on Wednesday, saying the risk of conflict was “real”, and urged Russia to de-escalate.

Ramadan in quarantine: Arrangements made for Halal meals at sunrise and sunset
2021-04-12