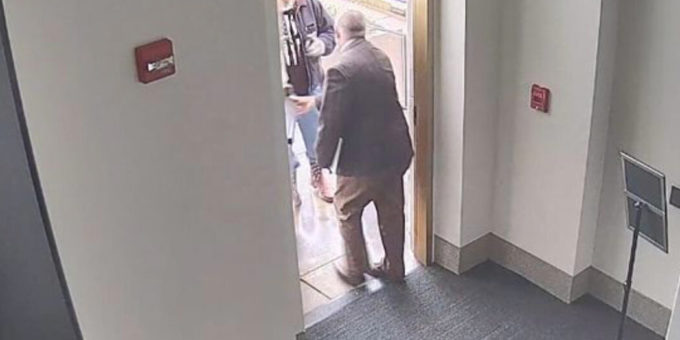 Lawmakers in Oregon ejected one of their colleagues from office for the first time in state history late Thursday night, voting 59 to 1 to oust Representative Mike Nearman for his role in helping a far-right crowd breach the State Capitol in December.

Mr. Nearman, who was the only no vote, had faced rising pressure from his Republican colleagues to resign from office this week, days after newly surfaced video showed him apparently coaching people on how they might get inside the closed Capitol. Previous security footage had showed how Mr. Nearman exited the building where protesters had gathered, allowing them inside and setting off a confrontation with law enforcement officers.

Mr. Nearman, who faces misdemeanor charges for his actions, said on Thursday that legislative leaders should have never excluded the public from the Capitol — a decision that was a coronavirus precaution. But Democrats said Mr. Nearman had shown a complete disregard for the rule of law and the principles of democracy.

“His actions were blatant and deliberate, and he has shown no remorse for jeopardizing the safety of every person in the Capitol that day,” Speaker Tina Kotek, a Democrat, said in a statement after the vote.

The case had striking similarities to the U.S. Capitol siege that unfolded a couple of weeks later. Although the crowd in Salem was smaller, it was filled with Trump supporters waving flags, far-right agitators wearing body armor, and people chanting for punishment: “Arrest Kate Brown,” they shouted, referring to Oregon’s Democratic governor.

But while Republicans in Congress have resisted major actions in the Capitol siege — recently rejecting a plan for an independent commission — G.O.P. lawmakers in Oregon coalesced in recent days around the idea that Mr. Nearman needed to go. Each of his colleagues joined in a letter this week calling for his resignation.

The House Republican leader, Christine Drazan, said Mr. Nearman had indiscriminately allowed violent protesters into the building. Representative Bill Post, a Republican who said he was one of Mr. Nearman’s closest colleagues, wrote a message explaining that Mr. Nearman had lied to him personally and to other Republican colleagues about whether there was evidence that opening the door had been planned.

“That plan put at risk lawmakers, staff and police officers inside of the building,” Mr. Post wrote.

In the video that surfaced last week, apparently streamed online in the days before the Dec. 21 breach, Mr. Nearman coyly repeats his own cellphone number, suggesting that anyone trying to enter the Capitol could text him.

“That is just random numbers that I spewed out. That’s not anybody’s actual cellphone,” Mr. Nearman said in the footage. “And if you say, ‘I’m at the West entrance’ during the session and text to that number there, that somebody might exit that door while you’re standing there. But I don’t know anything about that.”

Didi: Chinese ride-hailing giant files to go public in US

Woah! Tamil blockbuster Jigarthanda to get Bollywood remake and it will be directed by Abhishek Chaubey | Bollywood News
2019-07-19